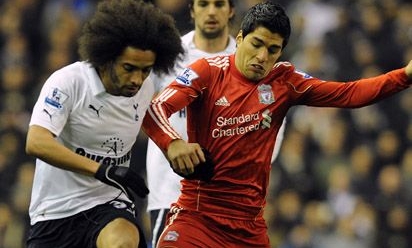 Liverpool were held to a goalless draw by title-chasing Tottenham Hotspur on a night when Luis Suarez returned to action after completing his eight-game ban.

The Reds enjoyed the majority of chances but Kenny Dalglish had to be content with a point after fog had earlier threatened to disrupt the fixture.

The result leaves his team four points away from the fourth Champions League spot.

Suarez started the night on the substitutes' bench as Dalglish opted for an attacking triumvirate of Craig Bellamy, Andy Carroll and Dirk Kuyt. The most notable absentee from the Spurs party was manager Harry Redknapp, whose plane was grounded due to fog.

It was Liverpool who provided the early highlights, Steven Gerrard slicing a pass through to Andy Carroll, who, with the Anfield Road goal in sight, was halted by a superb tackle from Michael Dawson. Two minutes later Glen Johnson had his legs taken on the edge of the area, earning a free-kick which was powered into the wall by Gerrard.

Having watched his side be overwhelmed from the off at White Hart Lane in September, Dalglish would have at least been happy to see those in white subdued.

That's not to say there wasn't attacking intent from the Reds. Jay Spearing came closest with a rocket from 25 yards, while Johnson forced Brad Friedel to save with his legs, but the fixture did not look destined to live up to its history. A total of 109 goals had been scored in the 39 Premier League meetings between the teams prior to this evening - more than any fixture in Liverpool's calendar other than Newcastle (112).

Anfield watched the second period begin in a similar fashion to the first, though Gareth Bale tried to liven things up with a low drill from an unlikely distance; this before earning a yellow card for a chest shove on Daniel Agger.

Friedel was required to dive for a Martin Kelly punt on 58 minutes, by which time Dalglish had decided fresh impetus was required. Suarez would be given 30 minutes to make a difference.

Within seconds the Uruguayan had stolen possession from Benoit Assou-Ekotto and dispatched Gerrard towards goal. It came to nothing, but the Kop roared its approval.

Bale appeared to be Tottenham's only threat, surging forward before striking low and hard. Again it was wide.

At last the game was becoming open. Kelly provided a cross which fell to the feet of Carroll, who fired over from eight yards.

Suarez was unselfish in feeding Carroll but his attempt at a return was blocked by Scott Parker.

With time running out, Bale probed again and a mix-up in the Reds defence almost presented him with a chance to win the game before Agger eventually cleared.

Gerrard then centred towards Suarez but the No.7 could not direct a free header beyond Friedel.