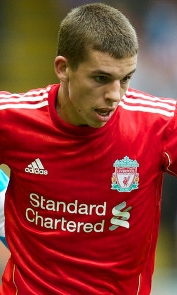 'We know what we have to do'

Jon Flanagan has set his sights on achieving the dream scenario of Liverpool reaching Wembley twice this season.

The youngster has been limited to a handful of first-team appearances this season but has turned out in the Carling Cup and is hoping to play some part in a run in the FA Cup.

The Reds take on Oldham in the sixth round of the FA Cup on Friday hoping to make it all the way to Wembley for the final - a place Flanagan has only been to as a spectator.

"I've been there twice," said the youngster in an exclusive interview with LFC magazine this week. "The first time was to watch my uncle Bradley [Orr] for Bristol Rovers in the play-offs against Hull when they lost. I also went to England against Spain a few weeks ago.

"It's a great ground, massive. Both times I've been the atmosphere was really good.

"It would be great to get there this season in the Carling Cup or the FA Cup, or both. That would be a dream come true."

"Michael Owen scoring two against Arsenal in 2001 is a great memory for me," he said. "I would have been about eight years old, watching it in the pub with my dad. All of his mates and some of their lads were there too. It was a brilliant day, I remember celebrating when he scored the second goal with his left foot.

"Arsenal absolutely battered us but Owen was a genius. I was made up at the end. It was a good week because the lads won the UEFA Cup later that week. They are great memories. It was a good season for the Reds."

The full Flanagan interview, an exclusive with Academy technical manager Pep Segura and a look back 20 years to the successful cup run of 1992 are in this week's LFC magazine.