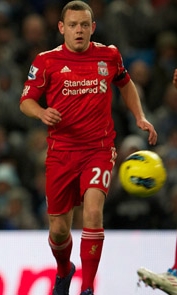 The midfielder believes the goals City scored in the first outing of 2012 could have been prevented and feels the final scoreline was harsh on Kenny Dalglish's men.

"The goals we conceded were our own fault and we could have done better to prevent them," Spearing told Liverpoolfc.tv.

"I thought as a team we did quite well overall. We used the ball well at times and just some lapses in concentration cost us the game.

"Sometimes it is the small details which can cost you in these games. When it was still 0-0 Jordan Henderson put a great ball through to Stewart Downing, and he was unlucky not to score when Joe Hart made a great save. If that had gone in it could have been a different story.

"We know what we have to do better when we come back here next week in the Carling Cup and we will be better.

"We will get at them right from the off and I still feel we can cause them a lot of problems. They are going to be two massive games and I don't see any reason why we can't make the final."

Liverpool's No.20 believes the return to fitness of Steven Gerrard can inspire the team in the semi-final clash and help the Reds achieve success in 2012.

He added: "We have Steven Gerrard back now and he is a massive influence on the team and we will go into the two games with confidence.

"Before we can think about that though we have to get ready for our next game which is the FA Cup against Oldham.

"It's another important game for us and we want to get back to winning ways in front of our own fans."

Spearing was also quick to pay tribute to Gary Ablett who sadly passed away on Sunday night.

Ablett was a major influence on the midfielder's career and Spearing will never forget his guidance and advice.

Spearing said: "It's a tragic loss for the game as well as the football club. I think all Liverpool and Everton fans appreciate what he did for both clubs.

"For me personally he was a great manager and a big influence. I played in the reserves for three years under Gary and we won a treble in 2008 which was fantastic.

"I had a lot of respect for him and have got a lot to thank him for, and it really is so sad."