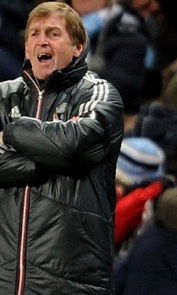 Kenny Dalglish admitted his frustration at Liverpool's 3-0 defeat against Manchester City on Tuesday night - but believes his players can learn from their Etihad Stadium loss.

Sergio Aguero put City ahead after 10 minutes, with his shot bouncing under the dive of Pepe Reina, before Yaya Toure headed home a second before the break.

The Reds dominated possession in the second half and their hopes of staging a comeback were bolstered when Gareth Barry was sent off for a second bookable offence in the 73rd minute.

However, City made certain of their win when James Milner scored from the penalty spot after Martin Skrtel had brought down Yaya Toure inside the box.

Dalglish told his post-match press conference: "I'm not so sure the scoreline reflects the way the game went. I'm not saying we deserved to win, but I think the lesson we've learnt from tonight is that if we're not clinical we're going to suffer.

"There are a lot of things that happened tonight that we can correct ourselves, so we need to go and do that.

"We had a good opportunity to open the scoring, but then we lost the first goal when we'd had possession with a throw in.

"The second goal was from a corner and we had a warning just seconds before it (when Reina saved Vincent Kompany's header).

"The third was when they were down to 10 men, Toure ran the length of the pitch and we gave away a penalty kick.

"It's a harsh lesson, but it'll be even harsher if we don't learn from it."

City's opening goal found the back of the net after Aguero's shot from the edge of the area bounced under the body of Reina.

Journalists quizzed Dalglish on whether he felt his goalkeeper was at fault.

He replied: "I noticed they changed the ball just after it, so maybe that was something to do with it?

"We're not going to sit and isolate individuals. We're never going to win anything with individuals - we'll win things with the squad.

"Every single member of the squad that played made a mistake in some way, shape or form. It's how they react to them that's going to be important."