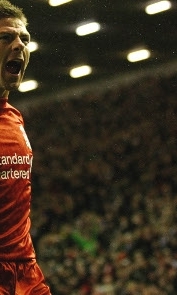 Jordan Henderson today reflected on Steven Gerrard's return to first-team action and declared: &quot;He's an inspiration for everyone here.&quot;

Gerrard inspired the Reds to victory against Newcastle on Friday night with a brilliant second half appearance from the substitute's bench and could be in line for a place in Kenny Dalglish's starting eleven when Liverpool take on league leaders Manchester City this evening.

"Steven is an inspiration for everyone here," Henderson said.

"You could see that when he came on against Newcastle, the whole atmosphere of the place lifted and on the pitch everyone lifted a gear.

"I don't know why we pushed our game on when Steven came on. But I think that shows just how good he is. He can change games and is a massive player for Liverpool.

"He is a massive threat to the opposition. He showed that with a great touch and a great finish for his goal."

Having now completed the first half of his debut season at Anfield, Henderson is looking to make further strides over the remainder of the campaign - and insists the Reds' skipper is the ideal player to help improve his own game.

"You learn things in training off different players," he said.

"I've learned a lot from Steven in training and when he's played in games and now he's back I hope to learn even more.

"Everyone knows he is an outstanding player and it's a real plus for us that he's back.

"I do try and watch him and see how he does things, and there are great players at Liverpool that I can try and learn from.

"I need to concentrate on my own game and keep on improving. Hopefully players like Stevie can help me do that."

All attention now for the Reds turns to this evening's visit to the Etihad Stadium when Liverpool will be looking for the victory which will take them level with fourth placed Chelsea in the table.

Although no team has yet to take a point off City on their own pitch, Henderson admits the Reds will be making the short journey to Manchester without fear.

"I don't think City are leagues ahead of the rest of us," he added.

"Beating Newcastle has given us a massive boost. We'll go into the game with confidence.

"We'll take belief from how we did against them at Anfield. We know City are a good team but so are we."

"We have needed to be more clinical in front of goal and we did that against Newcastle," he added.

"We took our chances really well and that's what we've got to keep doing now.

"We're on the right path and we will face City with a positive attitude."