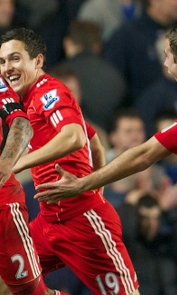 Glen Johnson believes it's only a matter of time before Liverpool dish out the hiding they have been threatening for weeks.

The Reds' picked up three precious points with a 1-0 victory over QPR at the weekend, but the scoreline was a scant reward for their complete dominance as shot after shot rained in on the Rangers goal.

It's become a familiar story this season as Liverpool have often torn teams apart - but haven't yet been rewarded with the final results they deserve.

"I definitely get the feeling a big win isn't far off," he said.

"We're coming close. We had so many chances against QPR to get a healthy scoreline and on another day with a bit more luck you score 80% of your chances and you find yourself 6-0 up.

"As long as you win the game it doesn't really matter but the way we are playing it's coming.

"We only got the one goal against QPR but three points was the most important thing.

"There was relief getting back to winning ways at home. It's always nice to bounce back after a defeat and that's what good teams do."

Luis Suarez was Liverpool's matchwinner at the weekend - rising to head home Charlie Adam's inswinging second half cross, and Johnson admits it's up to the rest of the squad to take some of the goalscoring pressure off the in-form Uruguayan.

"When you are playing and winning, nobody cares who scores but the more players who are scoring the better it is for the team," he said.

"You don't want to be relying on the same players.

"Luis isn't going to let any of the silly stuff bother him. People will try everything they possibly can to upset him because he's a good player.

"No opponent wants him to feel comfortable because if he feels comfortable he will score goals and that's not what they want. Of course he will get everything thrown at him. That's just the way it is.

"But he's exactly the same - a good professional and a good player. His confidence hasn't dropped. He always works so hard for the team and he plays very well when he's not scoring. But obviously we are much happier when he's scoring.

"I've been fortunate to play with some very good players and Luis is right up there.

"The difference between him and most other strikers is that he works so hard. Obviously he loves to score goals like most strikers but he works that bit harder. And when he's in front of goal he's the man you want the chances to fall to."