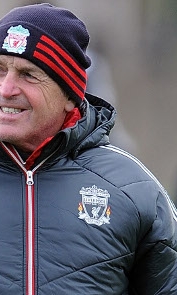 Kenny Dalglish has reiterated his unwavering belief that Liverpool's strikeforce are on the verge of a goal-fest.

The Reds once again created a raft of chances at the weekend but found QPR stopper Radek Cerny in inspired form during the 1-0 victory over Neil Warnock's men.

Dalglish was delighted with the overall performance of his charges and is confident they are still moving in the right direction.

"We did miss some chances, yes, but the goalkeeper saved a lot of them too," said Dalglish.

"Do I feel the need to go out and do something about that? Aye, whichever side comes along here next, we'll ask them to come without a 'keeper. That's the best way to do it, isn't it?

"Irrespective of what I say, it's not going to stop speculation we are going out in January to sign Joe Bloggs up front, or whoever. I don't need to say anything.

"For us it was a fantastic team performance. We are quite happy.

"I trust the players implicitly when it comes to scoring, implicitly.

"They continued to get in there on goal, and even with the 'keeper having a good day, they didn't drop their heads. They must be enjoying what they are doing, to continue playing like that, and creating chances like that.

He added: "I think some of the football we played in the first half was brilliant, and we won't change our beliefs or the way we play.

"That's why we brought the players here in the first place, and we will stick to those principles.

"Our performance was fantastic, and the only thing missing was the goals that confirm that.

"If you look at home performances they have been fantastic, look at points...maybe not. There is not a game we have played here that we couldn't have won, we shouldn't have won.

"The goalkeepers that have come here have done very well for their sides...I'm saying that again. Performance wise, we don't have any problem whatsoever, goals - yeah, we'd love more, and we'll get more."