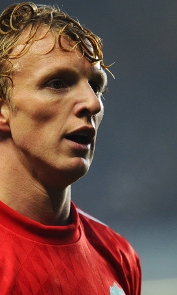 The 24-year-old returned to goalscoring ways with a 47th minute header to sink Neil Warnock's newly-promoted side on Saturday afternoon.

It was the forward's first league goal since October and Kuyt feels it was the perfect way for the Uruguay star to respond to recent media scrutiny.

"For all of us it is important to score a goal but especially for Luis, who played really well. It was good to see him scoring again," said Kuyt.

"He is just focusing on the game and he is happy with all the support he gets from the club, players, manager and his own fans.

"This is the Premier League so they (opponents) are trying to do everything to stop you and the better you are the more they try to stop you - and Luis is a really good player.

"But that is football and he knows that and he is a great professional and is just focusing on his job - that is what he does in training and in the game.

"Luis has done great so far and he is a great player."

Liverpool produced another impressive attacking display without seeing their dominance reflected on the scoreboard.

Kuyt admits it was frustrating to come up against another inspired visiting 'keeper in Radek Cerny but is convinced it is only a matter of time until the Reds hit the goal trail.

"We played really well but we are just a bit disappointed that we only scored once," he said. "We should have killed the game off in the first half. We created enough chances in the first 30 minutes to be two or three up.

"It didn't happen but at half-time we just told each other to keep going. We believe in ourselves and we knew we could win the game. We only scored once in the second half but the most important thing is the three points.

"If you win a game and are still disappointed at not scoring more goals that's the kind of spirit you need.

"We create so many chances and are top when it comes to how many times we've hit the bar and the post this season. We need to change that. Sometimes it's a little bit of luck that you need and it seems that goalkeepers who come to Anfield are playing their game of the year here.

"We have to believe in ourselves. We had a lot of players on the pitch today who can score goals. We have the confidence to keep going and I'm sure soon we will score more of our chances."

Meanwhile Kuyt remains one away from a landmark 50th league goal for Liverpool after failing to cap his return to the line-up by getting on the scoresheet.

The Dutchman's only strike of the season so far came in a Carling Cup win at Brighton but he feels it won't be long before he is back in the groove.

"I know how it works. Last season I scored in five or six games in a row and everything I touched was going in.

"This season I've been a little bit unlucky to be just in the wrong position when the ball comes across or I've missed a chance.

"What I will do is just work harder and I'm sure the way this team plays means whoever plays up front will score a lot of goals."