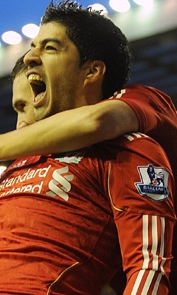 QPR defender Bradley Orr has described Luis Suarez as 'unplayable' after the Liverpool striker capped another sublime display with the winning goal on Saturday afternoon.

The Uruguay ace was a constant menace throughout the Reds' 1-0 triumph over the Hoops and Orr admits he has become a huge fan of the No.7.

Orr said: "I think he is unplayable. He's so strong, I didn't realise how strong he was for a small player. I love him. I'm a big Liverpool fan and to be on the same pitch as him was a pleasure."

A boyhood red, Orr realised a lifelong dream on 50 minutes when he appeared as a substitute for Neil Warnock's men.

It was a moment he will savour for the rest of his life - despite ending up on the losing side.

He said: "It's mixed emotions for me. I'm disappointed with the result, but on personal level, it's a dream come true (to have played here). I've dreamed about this day for years.

"I think it's the number one fixture the lads look forward to. It's disappointing to come away with nothing, but I don't think many sides will come away from Anfield with anything this season.