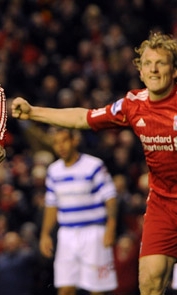 In pics: Suarez sinks the Hoops

Kenny Dalglish and his opposite number Neil Warnock were both full of praise for Luis Suarez after his match-winning performance against QPR.

The Uruguay forward scored the only goal of the game to ensure the newspapers will make happier reading than they did following defeat at Fulham earlier in the week which brought two FA charges.

Dalglish reflected: "The headlines don't matter, do they? But there'll be nice headlines for him tomorrow. He scored with a header, which doesn't happen too often, and he played really well."

On the performance as a whole, Dalglish felt his players were worthy winners.

"Some of the football we played was brilliant in the first half," he said.

"We will continue doing what we're doing. We cannot change our beliefs.

"It was an excellent performance, we made a lot of chances, we got one goal and they never got any. Three points for us - the points tally is no less than we deserved but maybe the goals tally was. But one is enough when the other team don't get an opportunity.

"The players showed great courage and belief to continue what we've been doing, and that's pass and move, get into the box and create chances - one day we're going to take them."

Warnock was in agreement that Liverpool deserved to take all three points.

"They pass it around for fun," he said. "The players they've got, they're going to cause any team a problem.

"They were the better side. Most people in the ground might have thought we'd go four or five down but we showed great resolve."