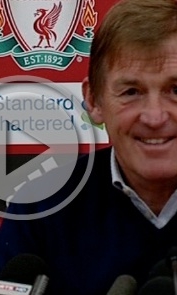 If you didn't catch Kenny Dalglish's pre-Chelsea press conference live on LFC TV Online, you can now watch it in full on demand.

The boss was quizzed by journalists on a variety of topics and you can watch the whole 16 minute chat now as the Reds return to Barclays Premier League action at Stamford Bridge on Sunday.