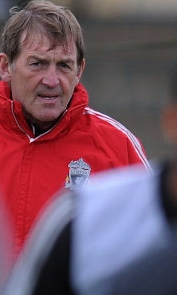 Kenny Dalglish today explained why he believes Liverpool's players can draw confidence from the amount of chances they've created in recent weeks - and warned opposition teams his side are ready to hit the goal trail.

The Reds are currently on an eight-match unbeaten run in all competitions - a sequence that has been characterised by the creation of a succession of goalscoring opportunities in each game.

Indeed, only Manchester City have had more attempts at goal than Liverpool in the Barclays Premier League so far this season.

However, Dalglish's men haven't always been able to make the most of their chances - but the boss is backing that to change.

"There is a difference between confidence and arrogance, but I think the players should have belief in themselves," he told his pre-match press conference at Melwood.

"It's difficult when the ball is not going in the back of the net for you, but they're certainly making enough chances to do that (score goals).

"Eventually they'll do it and somebody is going to get battered one day - the sooner the better for us. But even after they turn their chances into goals, it still doesn't mean the season is finished - we've just got to keep going.

"Just right at this moment in time, if they had converted a slightly higher percentage of their chances they'd be flying higher up the league."

Dalglish added: "Luis getting four (for Uruguay) will obviously not do him any harm whatsoever, and there are a few of the lads who've gone away and got goals.

"That's the only disappointing thing for me - the fact we've not got the goals a lot of our play has deserved.

Despite three successive Anfield draws, Dalglish was eager to play down any suggestion playing in front of the Kop generates any added expectation on his squad and, in particular, the players drafted in over the course of a busy summer.

"It might take a bit of getting used to, but it's not because they don't have the ability to get used to it or earn it," he said.

"We think Anfield is a fantastic place to play. Some people might come and feel it is intimidating for them, but the thing everyone has got to remember is when we play at Anfield they (the fans) are on our side, so we shouldn't let that affect us.

"There is a bit of adjustment for everybody, especially the new players, but we've been delighted by the way they've settled in and went about their business for most of the season.

"We're happy with what we've got, we're convinced we've got the right people, and we're also happy they're not going to be afraid of playing for this football club, everything it holds, and the traditions and history it has."

With the international break now done and dusted and players set to return to Melwood on Thursday afternoon, Liverpool will step up their preparations for Sunday's trip to Stamford Bridge to tackle Chelsea.

The Reds prevailed in last season's corresponding fixture, claiming a 1-0 victory in the capital in February to complete a league double over the Blues.

However, Dalglish warned those results will count for nothing come kick-off on Sunday.

"There is a reason - if we don't play as well or if they play better than us," he said when one reporter put it to the boss there was no reason his side couldn't repeat their Stamford Bridge success of 2010-11.

"We got our reward for last year by getting three points added to our tally. This year there are new people - a new manager at Chelsea, new players for us and them, a different environment and a different stage.

"We'll go and try our best to get as good a result as we did last year. Everybody is looking forward to it. It is a difficult game, but it's a difficult game for them as well not just ourselves. It's not just us that think it will be difficult, I am sure they do as well."

Like Liverpool, Chelsea were also busy in the summer transfer market, bringing in the likes of Juan Mata and Raul Meireles, while stalwart Frank Lampard has impressed in 2011-12 despite suggestions in some quarters the England man's best days were behind him.

Dalglish expects Andre Villas-Boas's charges to once again be near the top of the final standings come May.

He said: "I wouldn't expect them to be too far away. It's up to them how close they get. We're not really concerned about that - we want to get ourselves up there as well.

"I haven't really had a close enough look at them to see (how they've changed) but they've signed some players. Mata has come in, Meireles has come in and Daniel Sturridge has come back from loan at Bolton, so there are three for starters. We'll have a look at them over the next few days and we'll make sure we play to our strengths, but give them the respect they deserve."

On the form of Mata and Lampard, Dalglish added: "I don't think there was any suggestion from here Frank Lampard's time had passed. I think the people who said it are looking a wee bit stupid now. Juan Mata is a very good player, I just hope he has a nightmare on Sunday if he plays!"

As well as Meireles, Liverpool are also likely to come up against another former player in the form of Fernando Torres on Sunday.

"How they do it and how the individual sets themselves up to do it is up to themselves. We'll go there and try our best to repeat last season's result."

Asked about the form of Torres, Dalglish added: "It's nothing to do with us."

Meanwhile, journalists were eager to know what the boss thought of the challenge for the right-back position at Anfield.

Glen Johnson has started each of Liverpool's last three Barclays Premier League matches, but the England international faces stiff competition from Martin Kelly, who impressed on international duty by scoring two goals for the Three Lions' U21 squad over the break, and Jon Flanagan.

"Glen's biggest challenge this year was getting fit and once he got himself fit, he came in and has been excellent for us," said Dalglish. "Everybody knows he is a really good footballer. The fact he's got a challenger for the position here and for England won't do him any harm whatsoever.

"In the two games, if it hadn't been for Luis scoring four, Martin would have been top goalscorer for our international players with two goals.

"He was playing centre-back, which is where he started, and that's great for us to have seen him there and great for Martin to get a little bit of versatility. The two goals won't do him any harm whatsoever. Jordan (Henderson) made the two of them, so that's great for us as well.

"I don't think Martin played again last year after he got the injury at West Ham (in February). We did a lot of prevention work with him and I think both ourselves and Martin are getting the benefit of that now. When he was out, Flanno (Jon Flanagan) came in and did a fantastic job for us.

"We're quite fortunate we're quite strong in that full-back position and we've got the England international playing there at the moment. It's tough competition for everybody, but that's the way we want it to be and why we want a strong squad to be able to compete."

Meanwhile, Dalglish was asked if he had any further comment on the news the club yesterday received notification from the Football Association of their decision to charge Luis Suarez.

He said: "The statement says everything and our position has changed no way, shape or form. That's all we've got to say."