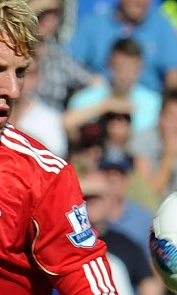 Keen: It's coming together

Dirk Kuyt insists Liverpool will head to Chelsea this weekend full of confidence they can record a second successive league victory at Stamford Bridge.

The Reds travel to London on Sunday for the mouth-watering Barclays Premier League clash and while the Dutchman is well aware the game will provide a difficult challenge for Kenny Dalglish's side, he's certain Liverpool have enough quality within their ranks to return north with three points.

Kuyt told Liverpoolfc.tv: "Everyone knows how tough it can be at Stamford Bridge, but we all look forward to the big games. We did really well against Arsenal away, and hopefully we can get the same result at Chelsea.

"The key is to stick together, be a team, have a great performance and believe in our qualities. We have a great team and have the possibility to beat them.

"We have a lot of quality in the team and we can only get better and better.

"I am always confident because I believe this team can win every game."

However, Kuyt feels the Reds' summer transfer dealings make them an even stronger proposition this time around.

"I think we have more strength in the team now and definitely more depth," he said. "They have also added a couple of quality players - it will be interesting to see Raul Meireles again and everybody knows how good Mata can be.

"It will be an interesting game and we're all looking forward to the big games, we can't wait to play them, and hopefully we can get the three points."

As well as Meireles, Liverpool are also likely to come up against another former Anfield old boy in the form of Fernando Torres.

Kuyt said: "We've played against Fernando already, and that's always strange. The first time is always the most difficult, but once you're on the pitch you want to do and you try to do everything to do that."

Meanwhile, Pepe Reina believes concentration levels could be key in determining which side prevails on Sunday.

"It is always tough to play there and we will have to be ready to get a result," said the Reds goalkeeper.

"We have to maintain our philosophy and be clever. We have to be ready from the very first minute and make sure we don't make mistakes that can cost us."