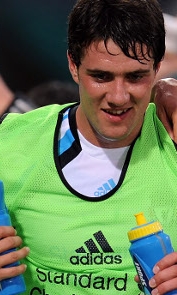 Martin Kelly has all the attributes to play at centre-back in the future, according to first-team coach Steve Clarke.

The Reds have no plans to move the 21-year-old from the right side of defence, where his performances have helped him become an England U21 regular.

However, Clarke would not be surprised if Kelly one day returned to the central position he regularly played during his years at the Academy.

"When you look at the size and shape of Martin, he's built like a central defender," said the Scot. "He's been fantastic at right-back and we've got no plans to move him from there at the moment but if he continues to develop and he gets an opportunity at centre-half then I'm sure he's got the attributes to make it a good position for him.

"He's done great to break into the Liverpool first team and really well to establish himself as an England U21. If he's going to become a senior player (for England) in the future he's going to have to continue to develop and work hard at his game."

Kelly has scored two goals in two games for England U21s during this international break - and Clarke was delighted to see the youngster net with his head on Monday.

"It was a good header from a corner, which is nice to see because we've done a little bit of work on his heading recently," he said. "It's nice to see that it is paying off.

"He scored a great goal breaking from midfield at the weekend, and it's obviously because he's playing matches, he's feeling good about himself, feeling confident, and long may that continue."

Meanwhile, Clarke thinks out-on-loan Jonjo Shelvey would be a great addition to Scotland's ranks following news this week that national boss Craig Levein has his eye on the midfielder.

Shelvey currently represents England at U21 and U19 level but could choose to swap allegiances thanks to his Scottish grandfather.

"From a Scottish point of view, we're a smaller country and we need to get as much talent as we can," said Clarke.

"If Craig has identified Jonjo as a potential target then I think that's good for Scotland and it might be good for Jonjo, but obviously it's up to Jonjo to decide.

"He certainly hasn't got much of a Scottish accent!

"He comes back here on a regular basis so next time he's down I might have a quiet word in his ear, but it's for him to make that decision.

"He's already represented England at U21 level and maybe he feels more comfortable in a white shirt rather than dark blue."