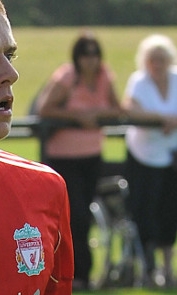 In our latest starlet in profile, we speak to defender Michael Wilson ahead of today's mouthwatering U18 clash at Manchester City.

The young defender has represented the club since the age of 12 and has given a good account of himself whenever he has been called upon by Mike Marsh so far this season.

Here the lifelong red tells us about his dramatic shoot-out winner against Bayer Leverkusen, which defensive trio he looks up to and why his most embarrassing moment is still fresh in his memory.

Who would win at 'skill skool'?

Kris Peterson. He's got all of the best tricks. He's very skilful and I think he'd win easily. If there's a spare ball knocking about in the changing room he'll be straight onto it pulling off 'around the world's' and all that sort of thing. He just loves messing about with a ball.

If you could holiday anywhere in the world, where would it be?

Australia. I've been there before and it was just brilliant. The beaches are great and the weather is fantastic. It's a big country but my preferred choice of destination would be Brisbane.

Drake's latest album.It's got a few decent tracks on it. I like a lot of house music too.

Cool Runnings. It was on TV the other night. It was hilarious. John Candy was a legend.

The Simpsons. It's such a clever comedy and it's funny on so many levels. Homer's great in it but I think Bart makes me laugh most out of all of the characters.

Yalany Baio. He always tries to put his Portuguese stuff on before matches. It's not the best.

Best moment in football so far?

We played in a tournament in Holland when I was 12 and came up against Bayer Leverkusen in the final. It went to penalties and I stepped up to take the decisive kick. It was a great feeling and still gives me a buzz thinking about it now.

Worst or most embarrassing moment relating to football...

That's a tough one. There are probably loads of embarrassing moments I can't think of right now. I tell you what is fresh in my mind though... giving a penalty away last weekend. We lost as well so I'll say that. Mistakes are part and parcel of the game but it's something I'll definitely be looking to learn from.

Which three teammates would be the most useful to get trapped on a desert island with - and why?

Nathan Quirk and Connor Wearing are good lads and we have some great banter together. They are two really good mates. I'd pick Baio too. He just makes me laugh all of the time!

If you could take one of the lads to have their haircut, who would it be?

Baio! That hairstyle is just poor. He needs it all shaving off!

Teammate who spends longest in the mirror?

Baio again! He's always flexing his muscles in the mirror.

Best ever player in your position?

Carles Puyol at Barcelona always impresses me whenever I see him. You can't go wrong with Jamie Carragher either. What a servant he's been. He'd be up there, as would Fabio Cannavaro.

It's the team I have grown up supporting. It can't get much better than that.

The U18s face Man City away today. Important to bounce back after the defeat to Bolton isn't it?

Yes, of course. We didn't perform like we can against Bolton and got punished. This is a big game and we need to step it up if we want to avoid a similar result this weekend. City will be strong but we've got good players and will be doing all we can to get the win.