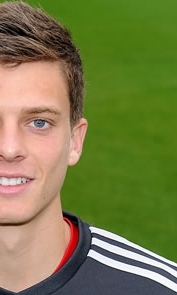 Beating rivals to a signature, England call-ups and NextGen progress - all this and more in our latest column with Academy director Frank McParland...

Last week we announced the signing of U17 USA captain Marc Pelosi and I have to say I am delighted to welcome him here.

I was at the FIFA U17 World Cup during the summer and saw him play on a number of occasions. That was when I began to earmark him for a future at our football club. His leadership qualities shone through, as did his versatility. He can operate in both positions down the left flank as well as in a central role if required.

He has played for both the U18s and the reserves but I imagine he will eventually settle down to be a regular member of the second-string's squad.

I think the signing shows that we are now competing with all of the top teams for the most talented youngsters across the globe. There were a lot of sides interested both home and abroad - as well as in the USA - so to sign him is a bit of a coup for us.

The recent international matches illustrated how we are moving in the right direction from a domestic point of view too. We had no fewer than four lads playing for England U19s when they beat Denmark 1-0, with Andre Wisdom, Conor Coady, Adam Morgan and Jon Flanagan all involved.

We also had the news that Jordan Lussey was called up for the Three Lions's U18s. It is a fitting reward for a lad who has enjoyed a superb start to the season. Jordan is a great example of the type of attitude we are looking for and he deserves to be involved with his country after seeing his previous opportunities hindered by injury.

We played our final match of NextGen Group 2 against Sporting Lisbon on Wednesday and the Portuguese outfit once again illustrated that they are a force to be reckoned with. It was nice to see Michael Ngoo get off the mark for the season, but that aside, I think we have to admit we were second best on the night.

The 5-1 scoreline may have flattered them ever so slightly but, just like when they visited Anfield in August, they were technically superior and deserved their win. They must be up there as strong favourites for the competition.

Looking at the other groups you'd have to say Barcelona will be there or thereabouts while we will take on either Inter Milan or Tottenham in the knockout stage.

Spurs have really impressed me so far and there's no doubt we will face a very difficult test regardless of who we play in the next round.

But we know we have far more to offer and as the season progresses hopefully we will step up a level or two.

Frank was speaking to Paul Hassall