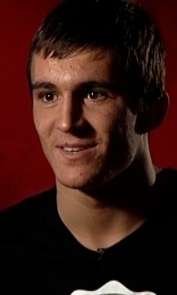 In our latest starlet in profile interview, we speak to striker Adam Morgan ahead of tonight's NextGen showdown with Sporting Lisbon.

The prolific frontman has continued where he left off last season, plundering a combined tally of 10 goals in total for both the second-string and U18s so far.

Here he tells us about his love of Jimmy Grimble, the day he passed his driving test and why he'll never get in a car with Andre Wisdom ever again.

Who would win at 'skill skool'?

Craig Roddan. You wouldn't think it but he's got a few skills in his locker. I remember when we were much younger he suddenly started pulling out all of these tricks I'd not seen him do before when we were having a training session on the indoor pitch. I was really impressed so I'll go for Craig.

(Long pause). I think it was something from Avicii. I like my dance tunes.

Adulthood on Monday night. We'd watched Kidulthood a few days earlier and wanted to see the follow up. It was good and a nice change from what I usually watch. I like sporty films like 'There's only one Jimmy Grimble'! I also have to admits I'm not against watching a bit of a girly romcom every now and then!

Well I've been involved with both dressing rooms this season and for the U18s it is definitely Peter Aylmer. For the reserves I can look no further than Toni Silva. He wears jumpers that I don't think my granddad would wear! He's got illuminous blue trainers too. Not for me at all!

Andre Wisdom. He loves a bit of Johnny Gunz. He drove me round to the sports centre the other day and subjected me to it. It was only a two minute drive but I won't be getting back in his car in a hurry!

Best moment in football so far?

Scoring at Anfield against Manchester United in the FA Youth Cup last season. It was extra special because one was in front of the Kop.

What about this season? 10 so far - which one stands out?

What about the reserve goal against Bolton? That proved to be a special day didn't it?

(Laughs). Yes, I actually passed my driving test that morning. It was at 9.07am. Craig Roddan passed that day too so it was a good start! We then got the win and I scored too so it was a nice hat-trick. I had the day off the next day and celebrated with a trip to Alton Towers with my girlfriend. It cost me a fair bit of money too which wasn't good because I'm saving for car insurance now!

Worst or most embarrassing moment relating to football...

My most embarrassing moment this season was when I put one over the bar from about six yards. That was in the Bolton game too, so it wasn't all good that afternoon!

Which three teammates would be the most useful to get trapped on a desert island with - and why?

Peter Aylmer because the banter with him is immense. Then I'd go for Matty McGiveron because he has a decent iPod so he'd have all the tunes to keep us entertained. Last but not least it would be Lewis Hatch. He smiles a lot so he'd keep us all happy.

If you could take one of the lads to have their haircut, who would it be?

I don't think mine looks the best at the moment so maybe I should pick myself. (Pauses) No, I'll go for Michael Ngoo. He's got some mad lines shaved into his head so I'd get that sorted out for him.

Teammate who spends longest in the mirror?

Easy. Kris Peterson or Tom Walsh. A lot of gel and a lot of fake tan!

Best ever player in your position?

Robbie Fowler. He's always been my idol. He was left-footed like me and I've always tried to learn by watching him score goals. He trained here at the Academy last season. I didn't get the chance to have a kick about with him but he still has it, even now.

It's like a big family. Everyone knows that when you run out on that pitch for Liverpool you must give 110 per cent. No matter which level you play at, you must always give your all. The fans love you for doing that and that's why our club is so special.

The reserves face Sporting Lisbon in the final match of Group 2 tonight. It won't affect the standings but it's important you still show what you can do, isn't it?

Yes, of course. It's been a tough group. We started so poorly against Sporting Lisbon and had some highs and lows along the way. Now we want to finish on another high against Lisbon tonight. We are going there to win. They embarrassed us a bit at Anfield and we want to try and put that right. We are going there to do a job. They didn't let anything affect them when they came to Merseyside. They just played their game as if they were the home team. They looked like they really enjoyed playing their football. Winning 3-0 at Anfield doesn't happen that much but they did well to be fair.

And what have you made of the NextGen experience as a whole?

It was always going to be nice to be involved in such a prestigious tournament from the start. Our aim was always to go through and play in as many different venues as we could against the best teams in the competition. I think we play Tottenham or Inter Milan in the next stage and we're pleased with that. The further you go, the more pressure and quality there is which is where you find out about the character of your players. We've got a lot of character in this team and I think we can go far.