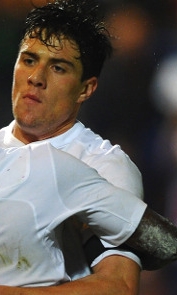 The Suarez Story on sale now

Martin Kelly was on the mark again as England U21s lost 2-1 in Belgium on Monday night.

Liverpool's No.34, who also fired last week against Iceland, headed his country into a 14th minute lead, but the hosts stormed back to win the Euro 2013 qualifier with a stoppage time winner.

Kelly and U21 skipper Jordan Henderson played the full 90 minutes and Jon Flanagan was an unused substitute.

Reflecting on the defeat, Henderson said: "We are very disappointed. We felt we did well in the second half when we settled into the game and I personally had a chance to finish it but we are still top of the [group], in a good position and we need to win our last three games.

"The games are not easy but we came here to do a job and unfortunately we didn't.

"We have a lot of work to do and hopefully this will give us a wake up call for the games ahead.

"I think we could have started better but in the second half we settled down and had a couple of chances.

"We need to be more streetwise in the last minutes to not concede but we will learn from that and come back stronger."