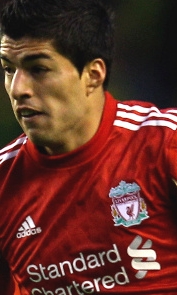 Luis Suarez has brushed off comparisons in his homeland with Lionel Messi.

A Facebook group has even been created called 'Luis Suarez the new Lionel Messi'.

Our No.7 admits he is proud to hear such praise but remains adamant that the focus should stay on the whole team unit.

"Comparisons with Messi embarrass me," Suarez is reported to have told El Pais.

"It also makes me smile, but I feel the comparisons are just the reaction from the Uruguay fans as everything seems to be going well at the moment.

"I am happy, but we have to look at the work of the whole team as it is not just about one player."