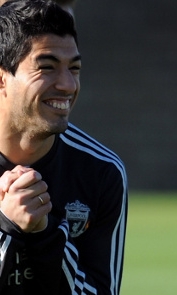 Luis Suarez has revealed his desire to remain at Liverpool for many years to come.

The Uruguay star has made a scintillating start to life on Merseyside and looks more than capable of carrying on the traditions of the club's famous No.7 shirt.

He admits he feels completely at home in England and believes it would be difficult to recreate his level of satisfaction anywhere else in the world.

Suarez said: "I've just started a phase of my career which I always dreamed about and wanted to do, which is to play for Liverpool.

"I have five years left on my contract and I think beyond that, I'm already thinking about staying many more years at Liverpool.

"I feel very pleased. It would be difficult to match the atmosphere, hunger for success and glory that this club has at another team."

Meanwhile, Suarez reiterated his joy at netting four goals in a World Cup qualifier against Chile on Friday night.

The striker gave another example of just why he is rated amongst the top footballers in the world and revealed that his teammates had joked that he could even have doubled his tally had he not been withdrawn on 76 minutes as a precautionary measure.

He said: "You always dream about scoring goals and scoring four in a game is not easy, but if it wasn't for the efforts of my team mates, I would not have scored the goals.

"The important thing is that I could keep playing, but I did not over-extend myself in some plays. One of my team-mates joked that if it wasn't for the slight back pain I could've scored eight!"

He added: "I love playing, so whenever I'm taken off I mourn a little, and get a sick feeling in my stomach, but it's all about the team, and I always appreciate everyone's efforts"