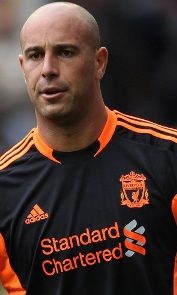 Pepe Reina is relishing the prospect of going head-to-head with some of his Liverpool teammates when Spain visit Wembley on Saturday evening.

The Reds stopper could face Stewart Downing and Glen Johnson when England entertain the world champions in what promises to be a mouthwatering encounter.

Reina remains hopeful he will get the nod to feature against Fabio Capello's men and admits the friendly holds added substance for him due to the fact it will take place in the country where he plies his trade.

"For those of us who play our club football in England this is a very special game," Reina said.

"I'm looking forward to it and I hope to play in it but Del Bosque must decide that.

"There is no such thing as a friendly these days. Whenever you go away with your national team you always want to win.

Reina is currently locked in a three-way fight for the Spain No.1 jersey with Iker Casillas and Victor Valdes.

It is a scenario that means he is often left out of the starting line -up, although he insists he is happy to play any role necessary for La Roja.

"When we go away with the national team there are 23 players who are very important players with their clubs but only 11 can start," he said.

"You have to accept your role and I always feel very lucky to be there. It's an absolute pleasure to be part of the squad.

"To be part of what's been achieved over the last few years is a dream for any footballer."

He added: "We have a great generation of players of the same age.

"We all knew how to win because we had won at a lower level before stepping up. As a nation we found a great philosophy of playing. We know how to play and we all want to play the same way.

"But it's not always possible for a country to play that way. It depends on the players and the team. Not everybody has the quality of players that we have."