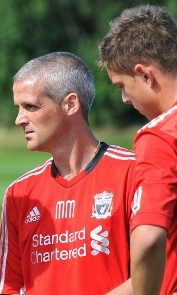 Mike Marsh is confident USA U17 starlet Marc Pelosi has a bright future at Liverpool.

The U18 coach gave the Academy's new recruit a run out during last weekend's 1-1 draw with Crewe and admits he has been highly impressed by his impact during training sessions.

Marsh told Liverpoolfc.tv: "He's a good player. He's been training with us for a while. He's in between squads really, training with the reserves one week and then the U18s the next.

"We've been waiting for his paperwork to come through and now it has everyone is delighted. He managed 45 minutes for us against Crewe last weekend and looked a really good player. He was also on the bench for the reserves at Blackburn.

"He's a left-footed player who can play anywhere on the left-hand side and he's also captain of his country at youth level.

"I think he will be a real plus for the football club."

Despite an opportunist header from Nathan Quirk, the U18s' hopes of securing a third win on the bounce were undone by the Railwaymen.

Marsh felt his side did more than enough to win the contest and was left to lament a missed penalty from Jordan Lussey as well as a whole host of opportunities.

He said: "We created a lot of chances from start to finish. They had a few too and hit the woodwork early in the second half, but other than that it was chance after chance for us. We also missed a penalty and then managed to get an equaliser.

"I don't think we can ask any more from the boys other than to start converting the chances they are creating."

He added: "We haven't really got a nominated penalty taker. Whenever Adam Morgan plays for us he takes them. Matty Regan took one at Everton recently and Sam Gainford was the one we had in mind last Saturday but he came off at half-time.

"Jordan was brave enough to step up and say he would take it. It was a great save and if he was called upon to take one again I'm sure he wouldn't hesitate."

Marsh has been pleased with the progress his team have made during his 11 competitive matches in charge and points to an emphatic success over third-placed Wolves as an example of what his youngsters are capable of on their day.

"We've progressed nicely. It's been a learning curve for us because we have a lot of young lads in the side, but we've adapted well on the whole," he said.

"We could maybe score a few more goals with the chances that we have been creating and with a bit of luck, in time, we will start to convert more of those opportunities."

He continued: "I think the 4-0 win at Wolves stands out. We didn't give much away in defence and looked good going forward. We could probably have scored more too. If you look at the table Wolves are up there challenging, so you now realise just how good that result was."