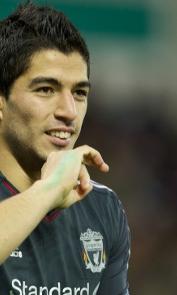 Charlie's bid to prove his worth

Daniel Agger admits Luis Suarez is causing him plenty of headaches in training - and claims there is no striker in the world who plays like our Uruguayan.

The centre-back has sympathy for defenders tasked with stopping a player who has created 19 chances in league competition this term and executed an unrivalled tally of 43 shots.

"I think his performances speak for themselves," said Agger in an exclusive LFC Magazine interview this week.

"Everybody can see that he is a class player. He is so different. I cannot find any other striker that looks like him or plays like him.

"But all credit to him and if he can continue like that, he is definitely going to be one of the world's best.

"He does it every day in training, so we know how hard he is to play against. People can see every Saturday afternoon that defenders are struggling to keep him at bay.

"It gives everybody in our team a boost to know we have someone like that in attack. To achieve something, I think you need players like that in your team."

The full Daniel Agger interview, plus an exclusive with Stewart Downing, is in this week's LFC Magazine.