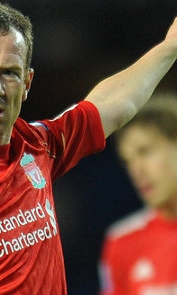 October Fan of the Month revealed

Charlie Adam admits he is on a mission to prove that he was no one-season wonder.

The midfielder's stunning form for Blackpool last term - including 13 goals - prompted interest from a host of top clubs, but it was Liverpool who won his signature during a busy close season at Anfield.

He has settled well into life on Merseyside but there is no danger of the 25-year-old becoming complacent.

"I hadn't played in the Premier League until last season and people judged me on how I performed for Blackpool," Adam is quoted as saying in Match magazine.

"But I want to show that I can be a Premier League player on a consistent basis, and that I'm good enough to play for Liverpool.

"The expectation levels here are really different to what they were at Blackpool. We are expected to win every week, whereas that wasn't always the case last season. But having that kind of challenge is something I really look forward to.

"My family and my mum and dad are proud , but no one is as proud as me to be a Liverpool player.

"Not many people can say they've had the chance to play in front of the Kop every week with over 40,000 fans behind them.

"I come in every day with a smile on my face, and when you're sat in the dressing room watching all the top players walk in, you realise what you're a part of."