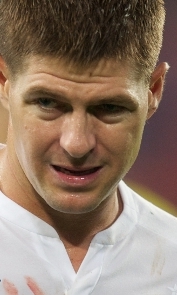 Steven Gerrard has revealed why he will be treating Euro 2012 as though it's his last-ever international tournament - and he's determined to help England end their long wait for a trophy.

The Three Lions breezed through qualification for the finals - which will be held in Poland and Ukraine next summer - and are awaiting to discover who they'll face in the group stage of the tournament.

Gerrard has figured in four international competitions for his country, but has never gone further than the quarter-final stage. It's a statistic he's eager to change next year.

He said: "If you put things into perspective, we've only been successful at one tournament ever and that makes you realise just how difficult it is to be successful at this level.

"But it would be nice, if this is to be my last tournament, to get to a semi-final or a final rather than come away disappointed like we have been previously.

"Going into any tournament as a player, you always take it as your last because you never know what could happen two years down the line.

Gerrard will miss England's forthcoming friendlies with Spain and Sweden as he continues his recuperation from an ankle infection.

He added: "I am disappointed to be out for the friendlies but I will be watching the games and supporting the team. I'm still fighting to get fit again but I'm not far away from hopefully being involved in the England set-up again.

"I've had mixed emotions. It's great to see the team doing well, that we've qualified but frustrating not to be more of a part of it. I was part of the early games but the lads have finished it off in style."

Though he's not figured for England since November 2010 against France at Wembley, Gerrard has remained in touch with the squad and senses a positive mood within the camp.

The Liverpool captain has been impressed by strength of midfield options at coach Fabio Capello's disposal, including Scott Parker and Jack Wilshere, who is currently sidelined with an ankle injury.

"I haven't been part of the squad recently, but speaking to the lads, it seems the atmosphere is good, the spirit is good and they've qualified so it's something to look forward to," said Gerrard.

"But we're at that stage now where people get carried away, expectations go through the roof when it's important to stay grounded and focus on the important challenges ahead.

"The competition is healthy in the England squad. There's three or four more friendlies before the tournament and hopefully that can help bring the best out of the team performance.

"But I think the priority is to get in the squad and then show the manager that you're worthy of a place in the starting 11. I think that's the aim for all of the players at the moment.

"Scott has done fantastic. I think he's used the disappointment of not getting into squads in the past to really drive him on and improve his game.

"I think that's showing in his performances. He's probably one of England's most consistent players over the course of qualification and certainly deserves his place in the team.

"Everyone wants to see Jack back as quickly as possible. He's such a talented kid and I'm sure if he gets back to the form he was showing previously then I'm sure he'll be a dead cert to get into the 23.

"He's a fantastic talent. I don't know how much longer the injury will take to heal, but anyone wanting England to do well wants to see him back.

"I want to see him playing really well again because he's a great player to watch. Us as England players want him to be involved again and to help make us stronger."