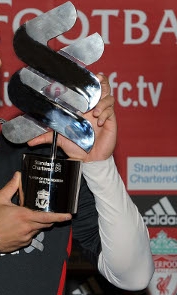 Luis Suarez today spoke of his delight after being named the Standard Chartered Player of the Month for an unprecedented third time in succession.

The Uruguay striker scooped October's accolade after tallying an incredible 70 per cent of your vote in a poll on this website.

Jose Enrique was named as runner-up, collecting 13 per cent of the vote, while Andy Carroll came third with four per cent. 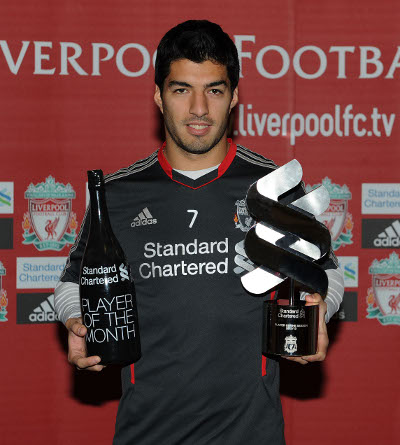 The No.7 also helped himself to three goals, including a strike on his Merseyside derby debut against Everton at Goodison Park and a Carling Cup double at Stoke.

Upon being presented with the award at Melwood, Suarez told Liverpoolfc.tv: "It's a bit of a surprise because to win it three months running makes me almost feel a bit embarrassed, but as long as people realise I'm just doing my job and I'm working hard for the team then that's great.

"I think if we had managed to pick up a couple more victories in those games we deserved to - the home games against Manchester United and Norwich - we'd obviously be a little bit higher up the league.

"The important thing is the team has been playing well and, for the most part, getting the right results - but we still know we can do that little bit better."

He added: "Obviously for a player it is very nice to pick up this sort of award - it's an extra source of motivation. The important thing is the dressing room is happy and that no matter who wins these awards, things are going well for the whole squad."

Watch our chat with Luis

Suarez's Stoke brace took his tally to seven for the season so far.

The 24-year-old's first at the Britannia came via a sublime solo effort - but was it the best goal of his Liverpool career so far?

He said: "I've scored some good goals, but for now I think that one at Stoke is right up there because of how the game was going at the time, it was a nutmeg and we were playing away in a difficult game. All that makes it one of the best of my career so far."

Suarez continued: "I'm happy because the team has been performing well, but as a striker I am always going to get plenty of chances and I could probably have converted one or two more.

"I also know strikers go through periods where they are trying so hard to score and they don't always go in. The main thing is I am playing well and the whole team is playing in the right manner.

"I think all of the lads are playing well and although we know we have some injuries to key players like Stevie and Carra, we know we have players who can step up and perform well.

"That's the good thing about having such a big squad - we have the quality for anyone to come in, do a good job and replace these players."