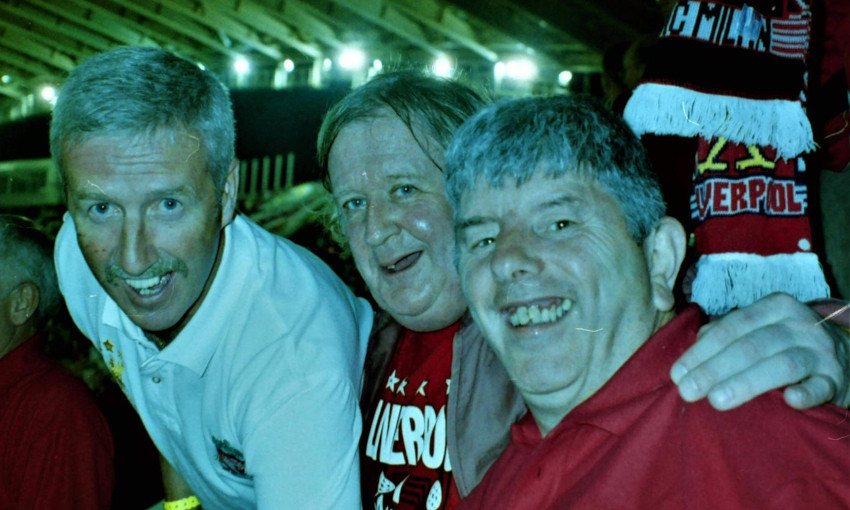 It takes something special to cut through the usual cycle of VAR debate, tactical talk and transfer gossip on Twitter nowadays. But just a few hours before one of Liverpool's biggest Premier League fixtures of the season, the news of Lenny Woods' passing did precisely that on Monday morning.

A 75-year-old retired docks maintenance worker from Wavertree, Lenny was – like his good friend Bobby Wilcox – of that treasured breed of Liverpool fans who transcend being a familiar face on the Kop, supporters’ buses and European away ends, and become almost legendary figures, thanks to their good humour, unwavering commitment to the cause and, in Lenny’s case, a singing voice that was a force of nature.

Having first started attending games in the 1950s, he once went more than half a century without missing a home fixture, and followed the Reds to Wembley on more than 30 occasions.

The most striking of the many tributes that flooded in on Monday was a video showing him holding court in his favourite haunt, The Albert. Under a canopy of flags and scarves stuck to the ceiling, and with a group of younger fans ringing him like an honour guard, Lenny sings We Won It Five Times with an almost spiritual reverence, head held high and eyes closed.

“That was what he always did, he always closed his eyes,” Phil Aspinall, his close friend, remembers. “That’s how you knew he was putting his heart and soul into it. Everything he had.”

A Kopite of considerable repute himself and the writer of matchday anthem A Liverbird Upon My Chest, Aspinall was just 17 when he first met Woods in the late 1960s, a chance meeting in the away end at Sunderland’s old ground, Roker Park, sparking a friendship that spanned 52 years.

“We got talking and started going the game together from there on, even though he was from the south end of the city and I was from the north,” he explains. “Lenny was about six years older than me, he got married and had kids, so we didn’t spend much time together outside of football, but we were on the phone more or less every other day talking about the club – where we were going to meet the next week, what train were we going to get from Lime Street?”

Phil later introduced Lenny to Wilcox outside The Albert, which became the trio’s matchday base of operations and – thanks to them – a hit factory on a par with Abbey Road, at least as far as the LFC songbook is concerned.

“Back in the days when the home games were always Saturday at three o’clock, we would meet there at 11 o’clock,” Aspinall laughs. “You’d have a skinful and then go, and we’d certainly be in good voice! But there was never anything nasty, everyone was really jolly and looked after each other. They were fabulous days.

“We also used to get the special trains in the ‘60s and ‘70s, even as far as Southampton, anywhere they were playing. We’d get a few drinks down us, someone would get a tune going and we’d start putting some words to it. More and more people in the carriage would join in and it would just snowball. Lenny was always heavily involved!”

We’re On Our Way to Roma, a song that captured the romance of Liverpool’s journey to the 1977 European Cup final every bit as much as Allez, Allez, Allez did for a new generation in Kiev two years ago, was a particular high point; Lenny later recounting the story of its creation for the BBC documentary The Story of the Kop, broadcast in the early ‘90s.

“Just before the Rome cup final we were coming back from Newcastle on a train and we started on this song to the tune of Arrivederci Roma, me and my mates got it going, and off it took,” he says in the footage, looking out on his beloved standing Kop shortly before its last hurrah in 1994. “And when we eventually got to Rome, you could hear it right around the Liverpool end of the ground.”

Earlier in the documentary Lenny describes having to use his wit to break the ice when heavily outnumbered by Celtic fans in The Albert before a Cup Winners’ Cup semi-final against the Glasgow side in 1966. It’s an image of the man that Stephen Monaghan instantly recognises from his earliest visits to the same pub as a teenager in the ‘70s. His fondest memories were formed much later, however.

“I remember all us young lads would go in and he’d be there singing, and you’d sit there and learn all the songs from them,” says Spirit of Shankly committee member Monaghan. “He had his own unique way of singing, as did Bobby. He used to get the ‘Wilcox Tours’ bus with Bobby, but in later years he got the Spirit of Shankly bus with us.

“He would make the coach journeys fly by, no matter if the ground was half an hour away or six hours away. When Lenny started singing, the coach would go quiet, everyone would just let him do his thing, then eventually join in. That was the respect he got, even off the young lads, they just knew he was a legendary fan. He wouldn’t have liked that word, he was very humble, but that’s why we all loved him.” 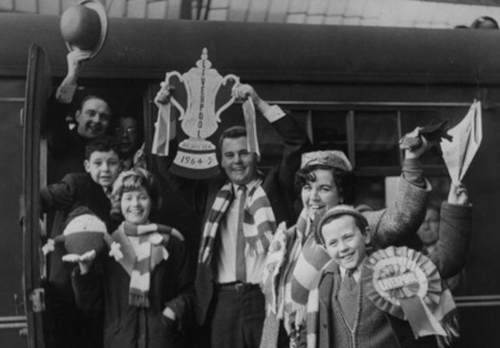 Many of Aspinall’s greatest escapades in Lenny’s company took place far from home, but it’s on the Kop that his absence will be most keenly felt, by Phil and others.

“It would all go quiet if there was not much happening on the pitch, then suddenly you’d hear Lenny burst into: ‘Come on you mighty Reds!’ You could hear it all over the Kop, and everyone knew exactly who it was.”

Aptly, it’s with a verse of A Liverbird Upon My Chest that Monaghan chooses to remember the man that once had the entire Spirit of Shankly bus in the palm of his hand.

“I spoke to Lenny a couple of weeks ago, he phoned me up to see how I was and we spoke about winning the title, it was: ‘This is one of our greatest ever triumphs, number 19, never mind about not getting in the ground.’ I’m just glad he was alive to see it. He used to phone our house and if I was at work he’d have my missus on the phone for half an hour talking football! That’s what he was like, just an infectious, lovely man. Ultimately that’s all I want to say – he was ‘one of Shankly’s best’.”