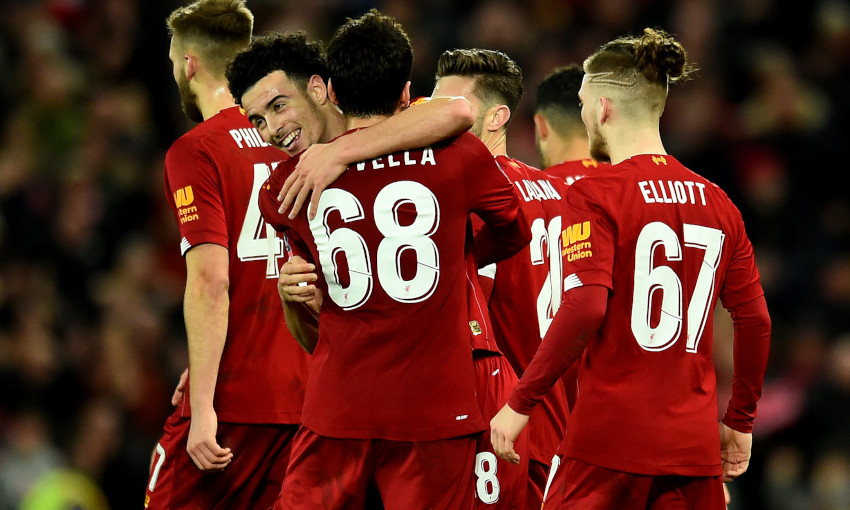 Curtis Jones enjoyed a moment he will never forget by netting the winner as Liverpool beat Everton to reach the FA Cup fourth round after a 1-0 win at Anfield on Sunday.

The 18-year-old Scouser curled home a magnificent effort beyond the reach of Jordan Pickford and into the top corner of the net.

With one swing of his gifted right foot, Jones brought about an Anfield eruption that had not been heard for some time. The Liverpool Academy graduate's glorious, 71st-minute strike was enough to see him add his name to the Reds' rich history of Merseyside derby day heroes. Make no mistake, this goal - this result - will be talked about for years to come as a Reds side packed with Academy hopefuls, saw off the Everton threat to book their place in the fourth round of the FA Cup. It was the finest afternoon in the careers of Nat Phillips, Yasser Larouci, Harvey Elliott, Neco Williams and Pedro Chirivella, who all - to a man - stepped up to the huge task thrown down to them by Jurgen Klopp, pre-match. Of course, Jones will consider it the zenith of his too, to date, as he scored one of Liverpool's goals of the season to see off the Blues in what was a moment from the heavens for the local midfielder. A wondergoal that decides an FA Cup tie against Everton at Anfield? The only thing missing from his Saturday night dream will have been it coming at the Kop end. One off the bucket list for him. A special strike that will go down in folklore. The young side could easily have wilted having lost James Milner so early on, but they refused to let it cast a long shadow. On came Larouci in his place as the captain's duty went to Adam Lallana. The former Southampton skipper took responsibility and turned in an excellent performance befitting of the armband. The 31-year-old was an inspiration in midfield combining an indefatigable work ethic with some silk and style in the engine room.

The 235th Merseyside derby, fittingly, was settled by a Scouser. Jones wasn’t even born the last time Everton won at Anfield but here, in the heat of battle, it was the 18-year-old, making just his second start for his boyhood club, who stuck the knife into Carlo Ancelotti’s side. He could play until he’s 40, Jones, but one doubts he will ever replicate the feeling he experienced when, 71 minutes into a tight, entertaining FA Cup third-round tie, he collected a pass from Divock Origi on the left corner of the penalty area, took a touch and unleashed the most perfect of right-foot curlers past a despairing Jordan Pickford, the ball kissing the underside of the crossbar on its way into the net. He became the youngest player to score in a Merseyside derby since Robbie Fowler, 26 years ago, and only the third 18-year-old to score for the club in the FA Cup. "I can't sum up my emotions," he said afterwards. "I've basically been begging to play." As for Liverpool, they can reflect on a remarkable collective performance. They gave three debuts here, new signing Takumi Minamino joined by centre-back Nathaniel Phillips, who was playing for Stuttgart against Sandhausen in the German second tier a month ago, and Yasser Larouci, a Frenchman signed from Le Havre as a flying winger, since converted into a rough and ready full-back by Barry Lewtas, the under-18 coach. Larouci, like fellow teen Neco Williams on the opposite flank, was outstanding, so confident, and oh so fearless. Remember those names, whatever you do. Ahead of them, 16-year-old Harvey Elliott gave Lucas Digne a chasing. Elliott, like Jones, has star quality. Klopp kicked every ball from the sideline, watching and encouraging like a proud parent. At the final blast of referee Jon Moss’ whistle, his grin could have lit a million Christmas trees. The fist pumps in front of the Kop were back. Liverpool ride on.

A new manager and a new year, but it still wasn’t enough for Everton to shake their Merseyside derby misery at Anfield. Kevin Campbell’s strike in September 1999 remains the reference point for their last victory on enemy territory after a youthful Liverpool side ejected them from the FA Cup courtesy of a Curtis Jones wonder-goal. Liverpool’s most impressive performer, Williams, was meanwhile stationed on the other flank and it was easy to see why Klopp felt the need to reference him as a gem being “created in the shadows” recently. Trent Alexander-Arnold will have applauded the 18-year-old’s crossing, contributions to the team’s offensive play and his comfort in possession under pressure. That goal guaranteed Liverpool, who dominated the second period, a fourth successive home win over Everton for the first time since 1937 and saw Klopp equal Bob Paisley’s club record of most derbies – 10 – undefeated from the start of a managerial career.

Jones knew exactly what he wanted to do and so did the whole of Anfield. It is one thing to think it and quite another to execute but that is exactly what the 18-year-old Liverpool midfielder did. Accepting the ball from Origi on the edge of the Everton penalty area, to the left of centre, Jones shaped to bend a right-footed shot into the far top corner of the net. It arched in exquisitely, kissing the underside of the crossbar on its way down and in past Jordan Pickford for added show-stopping value, and the Liverpudlian had a first senior goal to savour.