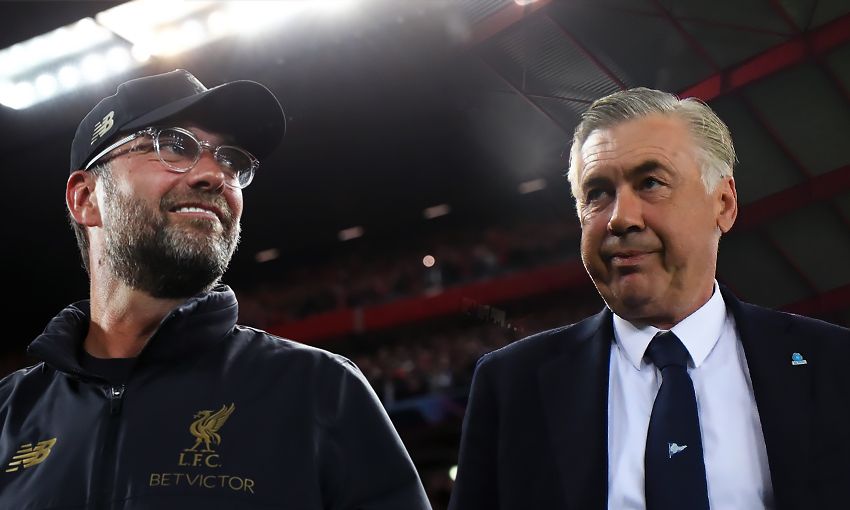 The Reds are guaranteed to progress to the knockout phase if they beat Carlo Ancelotti's side 1-0 or by at least two clear goals in their final pool match.

Napoli defeated Liverpool 1-0 at Stadio San Paolo in the reverse fixture, thanks to a 90th-minute winner from Lorenzo Insigne, and are unbeaten in 12 matches in all competitions.

So, what can we expect from Serie A's second-placed team at Anfield?

We caught up with I Partenopei fan and blogger Roberto Simone (@NapoliOutsider) to find out...

Are Napoli fans confident heading into this match? 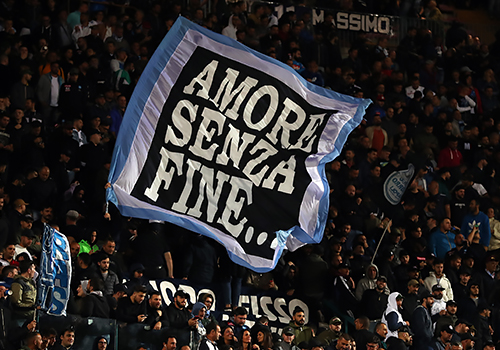 It's a bit of a mixed bag, to be honest. In Naples we usually tend to brace for the worst while hoping for the best. Obviously Napoli fans are confident in the team's strength, but at the same time they know how good Liverpool are.

The Reds were Champions League runners-up last year and they are leading the Premier League as the only unbeaten side there. It's going to take a great performance to come out of Anfield without a loss.

Ancelotti was in the process of winning over the fans last time we spoke, has he done that now?

Absolutely. There is still a minority that minimises his merits and mentions predecessor Maurizio Sarri every time Napoli don't win, but I would say that at this point well over 90 per cent of fans are with Carlo.

He has shown tremendous leadership and versatility and just by listening to him and seeing his work day in, day out, you can tell why he's won so much during the course of his career.

Will he make any tactical changes to the side that beat Liverpool in October? 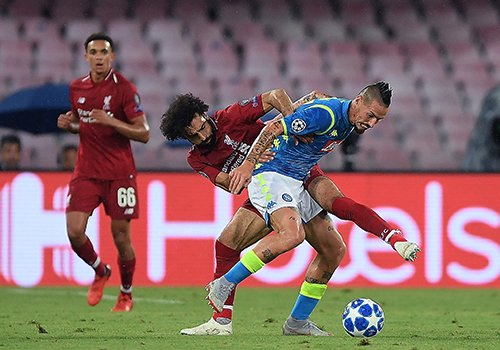 Not at the start, but he employs a very fluid 4-4-2. The game always starts with that formation, but then it evolves depending on the opponent. Sometimes he will play Nikola Maksimovic and his interpretation changes the face of the defence, as they will play some moments with a three-man line.

Also, the left winger will often come in field, allowing the left-back to push on, and the role of the right winger is also very variable.

The starting point is always the same, but fluidity and flexibility have been the main strengths of Ancelotti. His team will morph according to need during games.

Alex Meret, Faouzi Ghoulam and Amin Younes played their first games of the season on Saturday and the first two are theoretical full-time starters. I doubt that they will feature at Anfield, but Ghoulam would provide a huge point of strength, if added.

In the end it should be Mario Rui again on the left side, at least for this game and the next couple of weeks as Ghoulam regains full fitness.

Who has emerged as the driving force for Napoli since that meeting?

Defender Kalidou Koulibaly, midfielder Allan and forward Insigne have formed the team's backbone, the true strengths since the start of the season. But we're talking over the last two months, right? The name then almost has to be Fabian Ruiz.

He has tip-toed into the line-up and a lot of people didn't know what to expect from the young Spaniard. He has been an absolute monster and he always seems to be in the right place tactically. He can play anywhere on the pitch in the front two lines.

I expect Fabian to start as the left winger and then move wherever there is room between the Liverpool lines, helping out the central midfielders and making runs into space. He has played with leadership that goes beyond his 22 years.

How do you expect Napoli to line up?

I expect the same starting XI as the first leg, with the exception of Dries Mertens for Arkadiusz Milik as the Belgian is more rested. 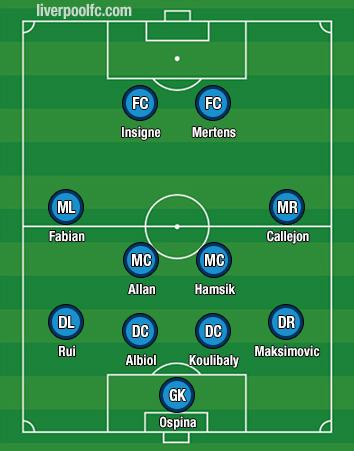 Milik has scored three goals in his last 95 minutes of play. He will be ready off the bench if needed, along with Piotr Zielinski.

Should we expect goals?

In theory, yes. If Napoli want to make it to the next round, their best bet is to score at least one goal and I doubt they want to risk an Everton-like situation. They are joint-top scorers in Serie A along with Juventus, and Milik and Mertens are respectively first and third in Serie A in goals-per-minute ratio.

That being said, Liverpool have the best defence in the Premier League and Napoli themselves have been very tough to score upon after the first three Serie A matchdays (or after the system change), losing only against Juventus since then.

We'll just see two quality sides going at each other. Qualification to the next round hinges on this game and the other reason for expecting goals is that the longer a 0-0 persists, the more Liverpool will have to push, increasing Napoli's chance of hitting on the counter-attack.

Which player should the fans keep an eye on at Anfield? 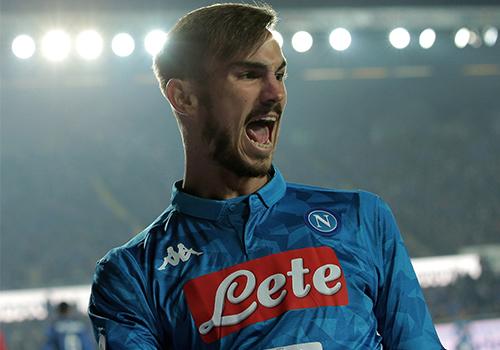 After praising him so much, I think I'll have to stick with Fabian, but I think Insigne has also shown the he can be decisive in the blink of an eye.

Unbeaten in the Champions League this season, have expectations now been raised beyond a place in the last 16?

No, not really. The last time Napoli won their Champions League group, they drew Real Madrid in the last 16. The draws have been abysmal in the last few years, so we're kind of expecting it to be tough and taking it day by day.

For the fans it's already a win to be leading the group entering the final matchday. We'll try to take the next step now.

Heartbreak for someone! In a normal situation I would predict a 1-1, but this is a do-or-die game and anything goes in matches like these.