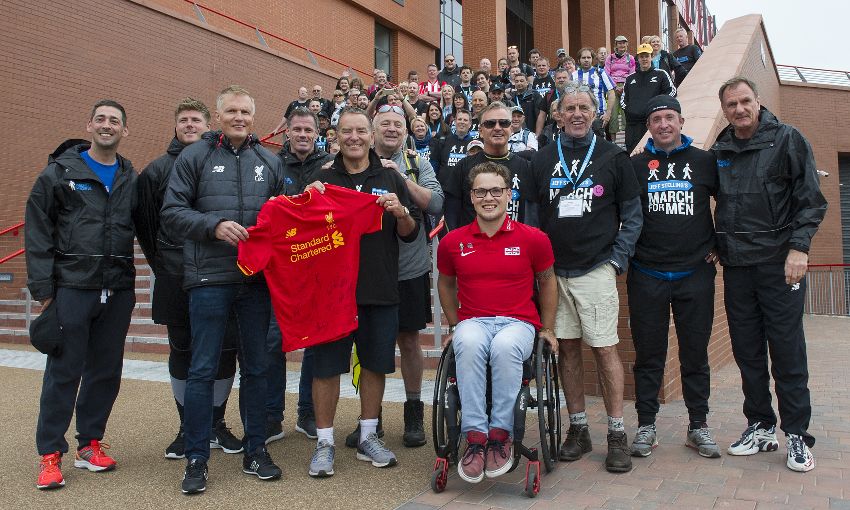 The TV presenter embarked on the 400-mile trek earlier this month with the objective of raising awareness and funds to help beat prostate cancer – a disease which kills more than one man every hour in the UK.

Stelling’s route began in Exeter and will conclude in Newcastle next week, having taken in more than 40 clubs across a distance of 15 marathons, on behalf of Prostate Cancer UK.

Over 600 people – former footballers, pundits, fans, and men and women affected by prostate cancer – will march alongside Stelling during the gruelling challenge.

And on Wednesday’s leg of the journey, day six of 15 for the 62-year-old, those in support included Jamie Carragher, Robbie Fowler, Mark Lawrenson, Neil Mellor and Phil Thompson.

The five ex-Reds were part of the supporting group as he walked from Chester FC to Prenton Park and Anfield, before crossing Stanley Park to finish for the day at Goodison Park.

The event is part of Prostate Cancer UK’s March for Men campaign, with special walks to take place in Glasgow, Leeds and London later in June as the charity aims to raise £1million in 2017.

“I’m grateful to the people of Cheshire, Liverpool and the Wirral who came out to support me at the start of my March for Men as we raise vital awareness and funds for Prostate Cancer UK,” said Stelling.

“Prostate cancer kills one man every hour in the UK, and I just decided I couldn’t sit on my backside and do nothing about it. I can put one foot in front of the next and hopefully raise awareness and raise funds to help men beat this diabolical disease.”

For more information on the March for Men, click here.