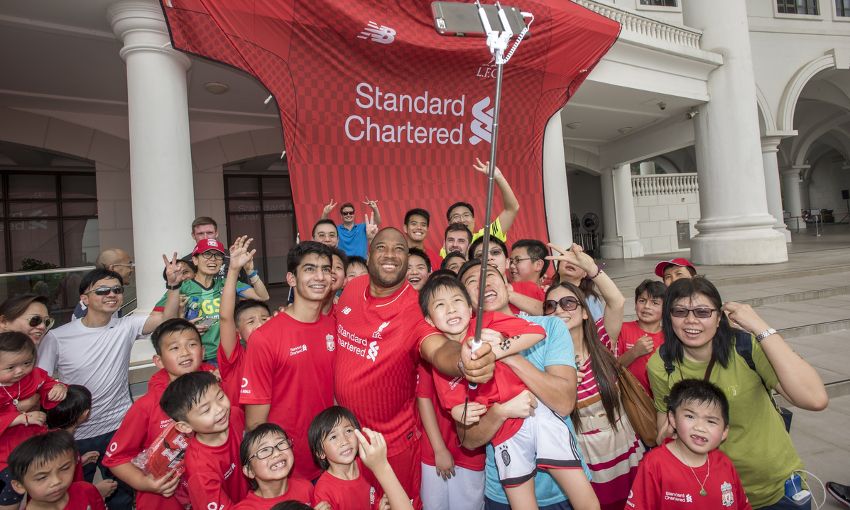 John Barnes was the star attraction at last weekend’s Liverpool FC Soccer Clinic, which was co-organised by the club’s sponsor, Standard Chartered.

Barnes and four Liverpool FC International Academy coaches conducted three separate sessions for a total of 180 juniors aged from six to 14, who are children of Standard Chartered staff and clients.

The young footballers were taught ‘The Liverpool Way’ as they took part in the two-hour training classes.

The children, who were all wearing Liverpool shirts, sampled a taste of life at Anfield as they entered the pitch through a replica of the famous Shankly Gates and enjoyed club-themed activities.

Amid the cheering of families and friends, every child received an official certificate and completed their training with a personal photo with Barnes.

Barnes said: “Being a part of the Liverpool FC Soccer Clinic in Hong Kong was a really special experience for me and I hope the youngsters enjoyed their time as much as I did.

“I saw a lot of talent there, some great enthusiasm and a lot of knowledge about Liverpool FC.

“We had some strong training sessions and had a lot of fun, which comes with being part of Liverpool FC, one of the world’s greatest football families.

“Standard Chartered has been a fantastic supporter of Liverpool FC and its work in organising clinics like these across the world helps give children some great memories.”

Barnes said he enjoyed being back in Hong Kong and that he has his own great memories of visiting the city.

He added: “I’ve been to Hong Kong before and the passion for Liverpool FC has always been so strong here.

“It always amazes me how popular the club is everywhere I go and how much people know about the current and former players. I love it here and hope to return again soon.”

Barnes to sign DVDs at Anfield store next week