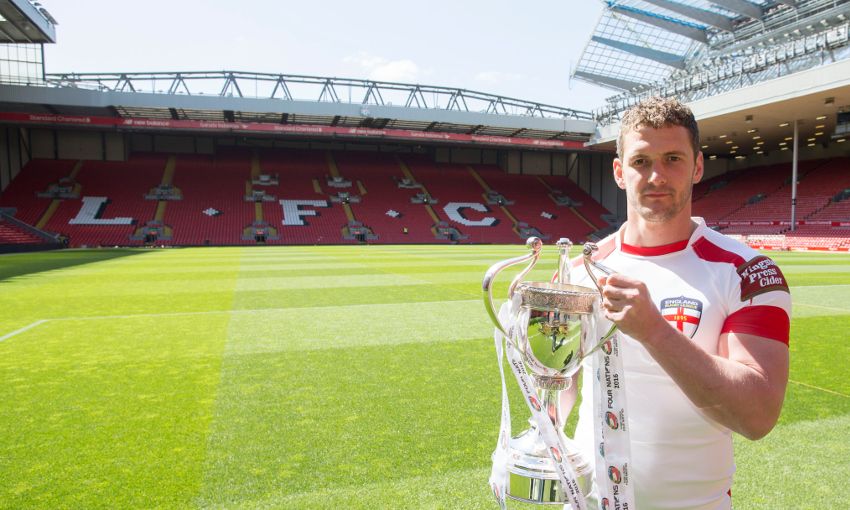 Liverpool FC today confirmed Anfield will host the final of the Four Nations rugby league tournament in November this year.

Sean O’Loughlin, England rugby league captain, said: “Playing at iconic venues such as the Olympic Stadium and Anfield are one of the reasons we play the game.

“Walking out in front of 45,000 fans in London last year was one of the highlights of 2015 for me and I am sure that playing in front of big home crowds will push the team on to what will hopefully be a successful campaign.”

“Anfield is an iconic sporting venue and I am certain that all teams will be determined to reach the final to play in front of what will be a very special atmosphere.”

The final is due to be held on Sunday November 20. Anfield last hosted a rugby league game almost 20 years ago when St Helens and Castleford clashed in a Super League fixture.

Before that in 1991 the iconic stadium also played host to Wigan’s World Club Challenge match against the Penrith Panthers.

Andrew Parkinson, operations director at Liverpool FC, said: “We are delighted to be able to host such a prestigious match in the rugby league calendar - we hope our increased capacity stadium will be the perfect backdrop.

“Anfield has played host to many landmark matches in its time and I’m sure the Four Nations final will be no different.”