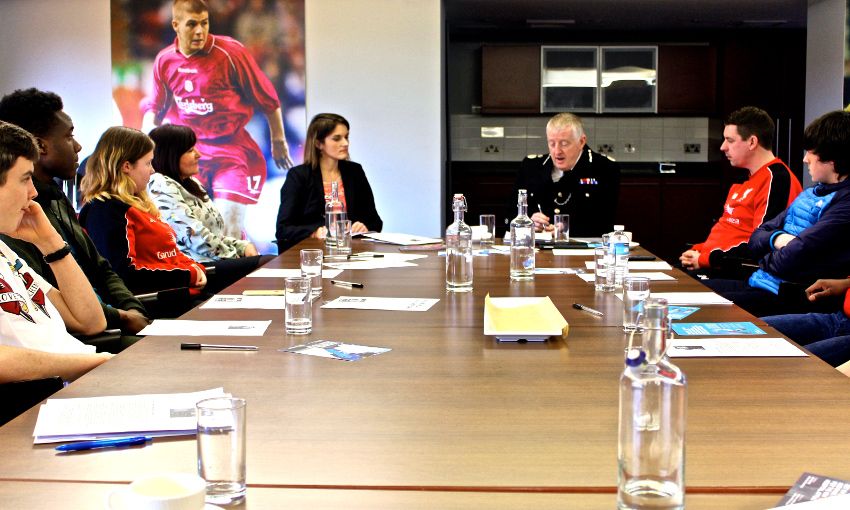 Participants from the LFC Foundation’s Kicks and Women and Girls programmes were lucky enough to spend time at Anfield with Sir Jon to learn first-hand from his extensive career and leadership experience.

Sir Jon shared his personal leadership story, some of the highlights of his 40-year career, and how he learned from experience and overcame challenges. After the interactive session, the group enjoyed a traditional Scouse meal to support the R Charity’s ‘Scouse at R House’ initiative.

Andrea Cooper, head of the Liverpool FC Foundation, said: “The LFC Foundation is committed to helping young people reach their full potential; therefore, it was fantastic for the participants to learn from Sir Jon Murphy’s wealth of leadership experience. We hope that they were able to gain some valuable advice from such a key Liverpool leader.

“We are also pleased to support R Charity’s ‘Scouse at R House’ initiative. We want to encourage our fans to participate in this initiative to help raise money for the new Royal Liverpool University Hospital, in the run up to Global Scouse Day on February 28.”

Sir Jon Murphy added: “I started my career with Merseyside Police when I was just 16 years of age, and it has been a great honour to serve my local community as Chief Constable.

“I am always really keen to share my experiences with young people and it was great to spend the day with such an inspiring group from the LFC Foundation. I’m sure they have a bright future ahead of them and I hope that they continue to be inspired to reach their full potential.”

Ged Carter, head of fundraising engagement at R Charity, said: “It’s fantastic that Liverpool FC Foundation is helping to raise awareness of the Scouse at R House initiative and encourage their fans to help raise money for the new Royal Hospital.”