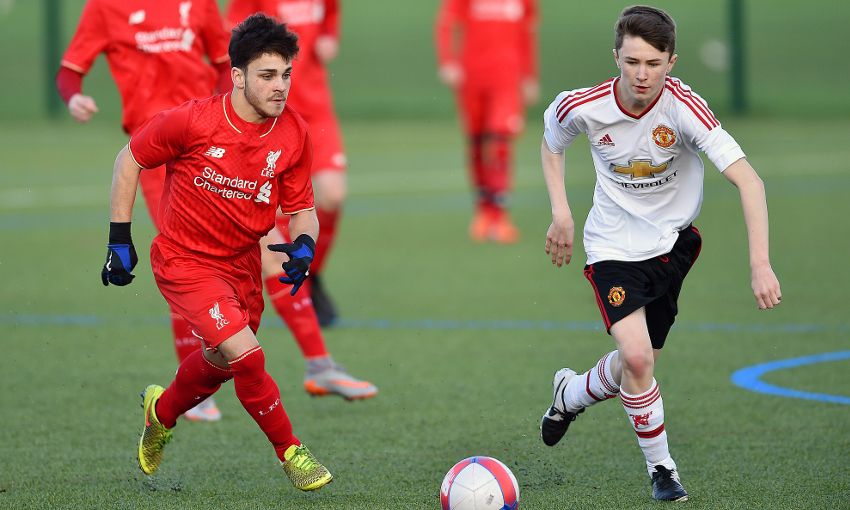 The Reds secured a 6-2 victory over the visitors despite the inclement weather at Anfield Sports and Community Centre on December 21.

The newly-established U17s Kicks development team was formed in October 2015 by holding trials to create an 11-a-side team.

Trials were held during the half-term period and 32 participants attended from across the city where 15 players were successfully selected from the trials to take part in the game.

Funded nationally by the Barclays Premier League, the Kicks programme is delivered in partnership with Merseyside Fire and Rescue and uses football and sport to engage youngsters and facilitate positive life choices.

Since launching in 2006, over 71,000 young people have taken part in the program that is now being run by 47 Premier League and Football League clubs.

Manager and LFC Foundation’s Kicks programme lead Tony Cosgrove said: “It is brilliant to be able to form an official Liverpool FC Kicks team to compete against Manchester United.

“The Kicks programme creates positive football opportunities for young people living in inner city areas as well providing the youngsters with a structure and guidance for not only football but life in general. We hope to continue to host similar fixtures throughout the remainder of the season.”

Andrea Cooper, Head of LFC Foundation added: “Kicks is a vital part of the LFC Foundation as it is a programme that engages with hundreds of local people across the City from areas that may otherwise be hard to reach.

“The creation of a Kicks development team is brilliant for those involved and hopefully this first match against Manchester United will be the first of many against various teams from across the country.”

For more information regarding your local Kicks session contact: kicks@liverpoolfc.com