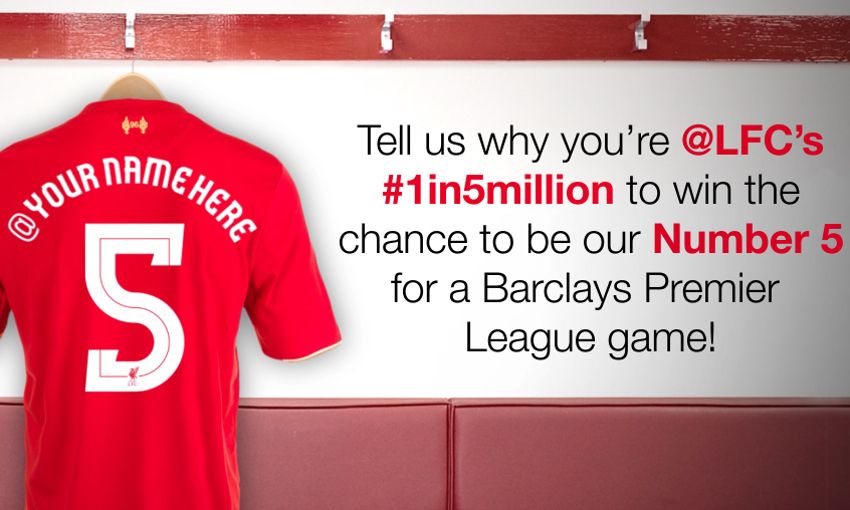 Liverpool FC is celebrating its five millionth Twitter follower this week by giving fans the chance to become the Reds' new No.5, for one game only.

The competition launched on Monday, with fans being called on to tell the club why they deserve this prize using the hashtag #1in5million, ensuring they follow @LFC.

Although the winner will not be officially listed as the Reds' No.5 on the teamsheet, they will attend the game with a friend, with travel and accommodation paid for, see their name in the official programme, have their personalised shirt with Twitter handle (username) hang in the dressing room before the game and be announced on the famous Anfield tannoy.

The competition ends on Friday (November 20) at 12pm GMT.

A shortlist of five entries will be made by an LFCTV panel, with a Liverpool legend shortlisting down to the final two. Twitter followers will then vote for their favourite and name their winner. Shortlisted entries will be given a home shirt with their Twitter handle listed on the back.

Visit twitter.com/lfc for further information on the competition.

Matthew Baxter, chief media officer at LFC, said: "Our fans are incredible. Wherever they are around the world, they are passionate, loyal and full of pride. We want to thank them for their support with the opportunity to win an extraordinary, money-can't-buy prize.

"We have found that social media brings our Liverpool family closer together – wherever people are in the world, they can chat about the club that is a major part of their lives. By using Twitter for a competition like this we give fans, wherever they live, a chance to share their passion for their club and potentially win the prize of a lifetime."

In addition to the #1in5million competition, there will be an exclusive offer for brand new LFCTV GO subscribers - who can receive 50 per cent off an annual subscription to our video on demand service (£25 instead of £49.99). For details and to sign up using promo code LFCTVGO5, click here.