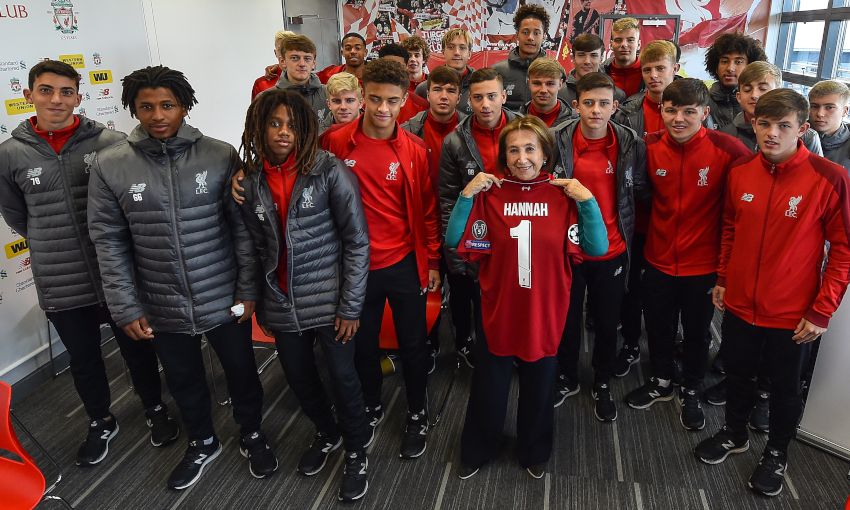 'We can't wait for the mini-derby under the lights'

Liverpool FC welcomed The Holocaust Educational Trust to the Academy this week as Holocaust survivor Hannah Lewis MBE delivered a talk to Liverpool's U14, U15 and U18 squads.

Founded in 1988, the Holocaust Educational Trust aims to raise awareness and understanding about the Holocaust in schools and among the general public.

Lewis shared her own experiences and took questions from the youngsters at the Kirkby-based training ground before being presented with a shirt on behalf of the club.

Liverpool U18s striker Paul Glatzel said: "It was a real privilege for the lads to be able to listen to Hannah’s story to gain a better understanding of the traumatic experiences that she and the other millions of people impacted by the Holocaust went through.

"We would like to thank Hannah for visiting the Academy to share her experiences and hope to welcome her back to Kirkby in the near future."

Karen Pollock MBE, chief executive of the Holocaust Educational Trust, said: “We are delighted to be working with Liverpool Football Club to give their Academy teams the opportunity to hear from a Holocaust survivor.

"Hannah Lewis’ incredible story will hopefully be something that will always stay with them as they embark on their careers, and an educational lesson they will never forget."