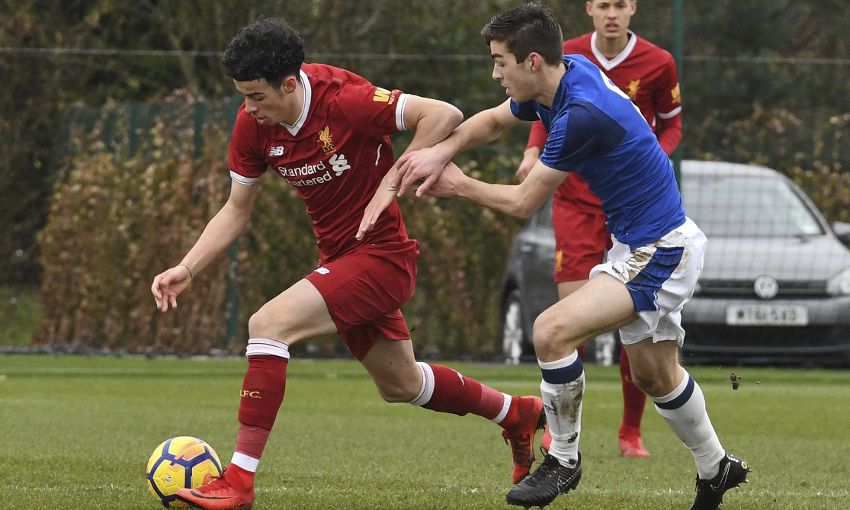 Liverpool U18s were beaten 3-1 by Everton in their mini-derby on Saturday morning.

Despite creating a host of chances, the young Reds conceded too much ground in the first half as goals from Elliot Richards, Tom Scully and Manasse Mampala earned the Blues a commanding lead that only a stoppage-time effort by Glen McAuley could dent.

Steven Gerrard’s team were dominant throughout the second period but could not strike again and were on the wrong end of a scoreline that did not tell the full story of an absorbing game.

“We gave ourselves a tough task with the goals we gave away in the first half. We came out a bit better in the second half and had a lot of possession but just couldn’t score,” said assistant manager Tom Culshaw.

“You’ve got to score with the possession, and you also can’t give silly goals away – especially in derby games like this against Everton and teams who are up for the battle.” 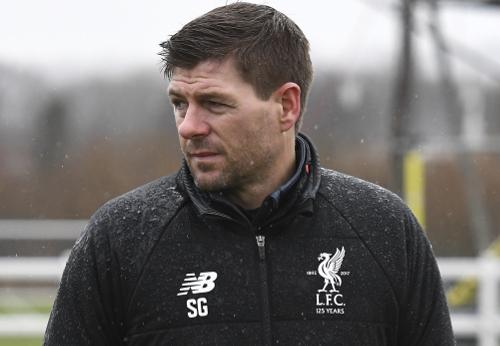 Strengthened by the returns of the likes of Curtis Jones and Adam Lewis to the line-up, Liverpool sought a response to three successive defeats in all competitions.

That ambition was dealt a blow with just four minutes on the clock, though.

Despite the visitors’ bright start amid pouring rain at Finch Farm, an Everton corner from the left found Richards with enough space inside the box to direct a header past the touch of Kamil Grabara.

The young Reds shook off the setback and set about imposing their authority on the game, with only a crucial clearance denying McAuley a tap-in from Lewis’ excellent low cross on the quarter-hour.

Jones was an influential figure from his central role and went close to an equaliser twice in as many minutes at the midway point of the half.

First, an effort from the edge of the area took a significant deflection and looped narrowly wide of the left post, and then the 17-year-old dragged a shot across goal from the right channel.

LFCTV GO: The action at Finch Farm in 90 seconds

But Liverpool’s deficit was doubled on 26 minutes. Scully tried his luck with a drive from around 25 yards and when Grabara fumbled the ball, it dropped into the bottom corner.

Gerrard’s charges were thwarted twice soon after as Jones’ side-footer was blocked en route to goal by Richards and McAuley’s rebound hit on the turn met the strong palms of Nicolas Defreitas-Hansen.

Their frustration was compounded when the Blues bagged a third. Mampala ran off his marker to collect a pass from the left flank and clinically dispatched an angled finish beyond the goalkeeper.

McAuley, who had earlier flicked a header wide from a promising position, next fired over from the middle of the box after more industrious work by Jones.

But the No.9 did net before the break. The outstanding Liam Millar’s latest weaving run along the byline opened up an opportunity to square for his teammate to convert and hand Liverpool a lifeline. 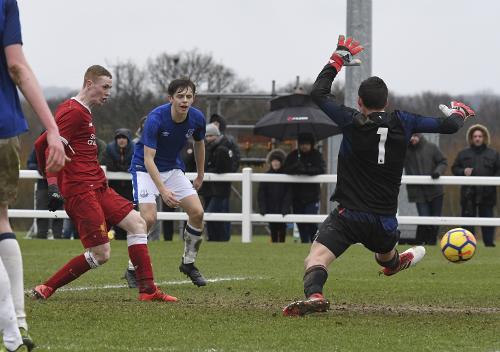 The Republic of Ireland youth international threatened again six minutes into the second half, controlling Lewis’ knock on his chest and sending a crisp attempt too close to Defreitas-Hansen.

Millar then drew a smart stop from the Everton goalkeeper at his near post, having neatly stepped inside the full-back, as the away side mounted increasing pressure on their hosts.

The same player skewed his shot too high when Rhys Williams intelligently nodded a back-post corner across the area, while McAuley miscued a fine chance upon being teed up by Lewis.

Late on, Defreitas-Hansen had to stretch to paw away Lewis’ swerving free-kick aimed at the left corner from the right angle of the box – and, somehow, it remained 3-1.