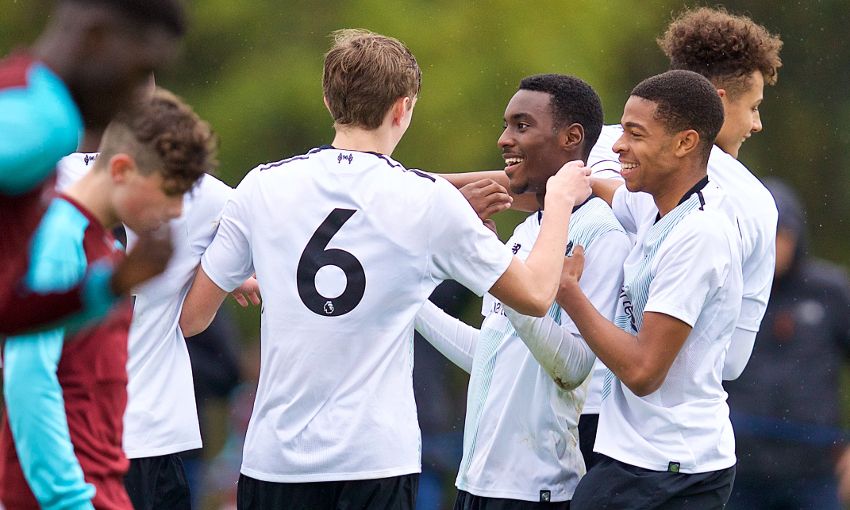 Pep: The Academy is a big advantage for Liverpool

Rafael Camacho scored twice as Liverpool U18s produced a superb away performance to beat West Ham United 6-0 in the U18 Premier League Cup on Saturday.

Glen McAuley, Curtis Jones, Tom Clayton and Liam Millar were also on the mark as Steven Gerrard's side made it two successive wins in Group D.

Reflecting on the win, Gerrard told Liverpoolfc.com: "We started pretty strongly and West Ham weren't comfortable in possession and we pressed them really well.

"Glen got our first goal with a tap-in and the second was an individual effort from Rafa when he cut inside from the left and curled one into the roof of the net with his right foot. It was a great finish.

"Tom got our third goal when he connected with a ball played in across the face of goal. I've been absolutely delighted with Tom since he's come back from injury. He's been brilliant.

"I said to the lads at half-time, even though we are 3-0 up I was disappointed with them because we could have gone in winning by four, five or even six goals.

"We were that strong and that dominant, I thought we were a level above West Ham, but I felt we needed to be more clinical and ruthless and really put teams to the sword.

"I had a little go at them at half-time because it's about standards and not easing off the gas, because against better sides we might get punished.

"The lads responded really well in the second half. Rafa scored again with a great free-kick that he curled over the wall and into the corner of the net.

"Curtis got our fifth goal after great work from Glen. He could have scored himself but he unselfishly gave the ball to Curtis to score.

"I took Curtis off to give him a rest and Liam came on to make it 6-0 with an individual effort.

"I don't think West Ham could have complained if we had scored eight, nine or even 10! We were that dominant and we were a level above.

"Overall, I'm pleased with the performance and the clean sheet, but the message from today is we need to be a bit more ruthless and clinical, even though it was 6-0."