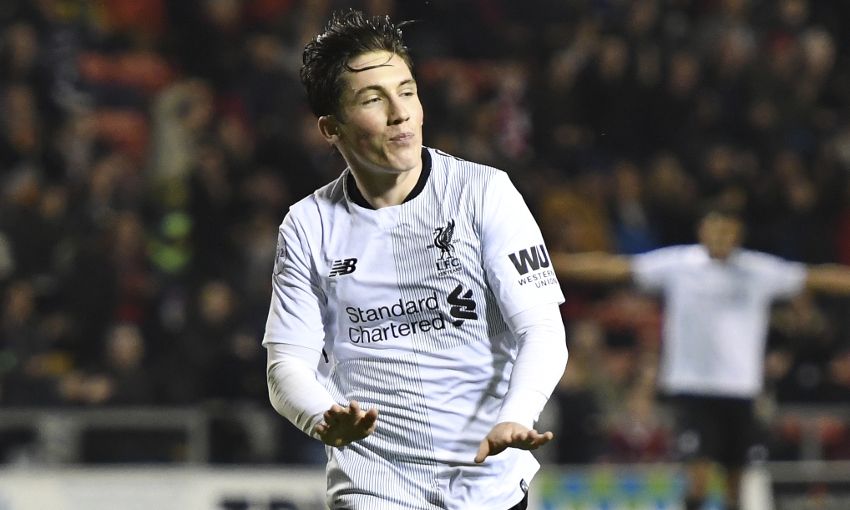 Harry Wilson is determined to keep impressing for Liverpool U23s as he aims to secure opportunities with the first-team squad.

The Premier League 2 Player of the Month for September fired his seventh goal of the season during Monday’s 3-1 win over Manchester United at Leigh Sports Village, as Neil Critchley’s side maintained their lead at the top of the division.

The 20-year-old has been in fine form since an Achilles injury picked up in pre-season meant a delayed start to 2017-18.

While admitting his frustrations at not being able to impress Jürgen Klopp, the Welshman retained a strong belief in his ability and tried not to let an extended spell on the sidelines drag him down.

“It was very frustrating for me because last season was a very good one on a personal level,” Wilson told Liverpoolfc.com.

“I ended the season going away with Wales, which was great for me to be back involved with the national team.

“I came back in pre-season with the idea of trying to impress the manager only to pick up my injury, which was a pain for me.

“It taught me a lot mentally when I was out, and now I’m back and hoping to continue how I left off last season.

“You can’t let [injuries] get you down in football because you might only get one or two chances and if you let it affect you mentally you might not be right when that chance comes.

“It’s important to stay mentally strong so when your chance comes you have to take it.”

Wilson enjoyed a fruitful 2016-17 campaign which saw him score 28 goals for the U23s and make his first-team debut during the FA Cup tie away at Plymouth Argyle.

To become a regular in Klopp’s squad remains the Welshman’s long-term goal and he will give everything he possibly can to achieve that ambition.

He added: “It was special to make my debut last season for the club I have played for since I was eight years old and I love, so it was great for me, but I want more of that and I don’t just want it to be that one game.

“I want more of it and hopefully if I keep impressing for the U23s I can get that.”