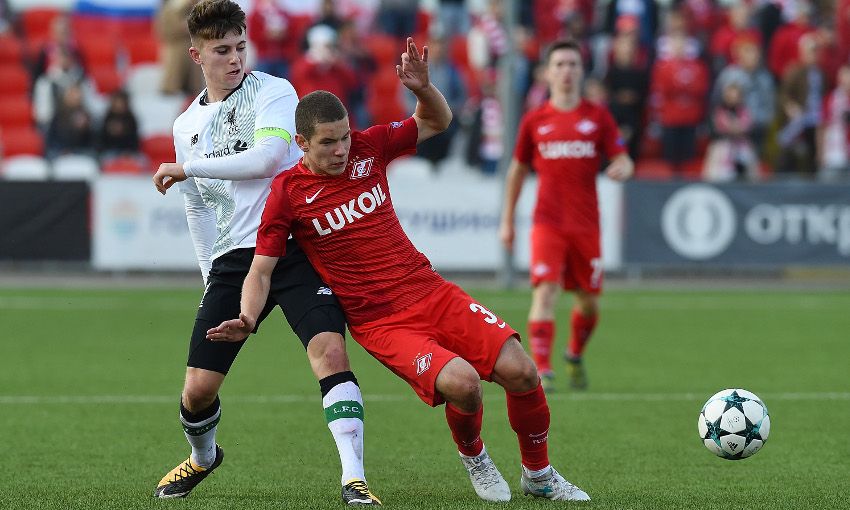 Brewster on Critchley rapport, 'a big step up' and U23s' winning run

The Reds had gone into an early lead thanks to Adam Lewis' stunning drive but were dragged back before half-time when Aleksandr Rudenko's free-kick attempt was inadvertently directed in by the wall.

Rudenko doubled his tally in the second period with a calm finish inside the box and the visitors were unable to find a way back into the game after Conor Masterson was red carded 15 minutes from time.

Perhaps unsurprisingly given that the U19s ran out 4-0 winners in their first outing in the competition, Steven Gerrard opted to name the same starting XI.

Ben Woodburn, meanwhile, continued in his role as captain.

But, despite that continuity in selection, the Reds did not have things all their own way in the opening exchanges, as they had done against Sevilla.

Spartak underlined their threat after just three minutes when Kamil Grabara was required to make an impressive save from Daniil Lopatin's close-range effort.

Rudenko then almost caught the Polish goalkeeper out with a chipped attempt, which George Johnston just about headed clear.

Thankfully, the visitors responded, and moments after Rhian Brewster had fired into the side-netting, they were ahead.

Lewis had just one thing in his mind as he raced onto Liam Millar's poked pass, and produced a sweet half-volley into the bottom corner to put Liverpool in front.

Unfortunately the lead lasted just six minutes, with Rudenko receiving a slice of luck as a free-kick from 25 yards took a sizeable deflection before finding the net.

But the Reds kept pressing for further goals, and both Brewster and Curtis Jones saw attempts from the edge of the area well saved before the break.

Liverpool started the second half in the ascendancy, but had created few opportunities from their possession by the time a poor clearance allowed Rudenko a one-on-one chance that Grabara did well to keep out.

And the Russian forward was less forgiving when presented with a similar opening in the 57th minute, finishing coolly to give the hosts the lead.

In an attempt to get his side back on the front foot, Gerrard introduced pacey winger Bobby Adekanye for Edvard Tagseth.

But the loss of Masterson to a second yellow card shortly after somewhat dented the visitors' hopes of getting back into the game.

And so it proved as Spartak held out against a late onslaught to secure three points.