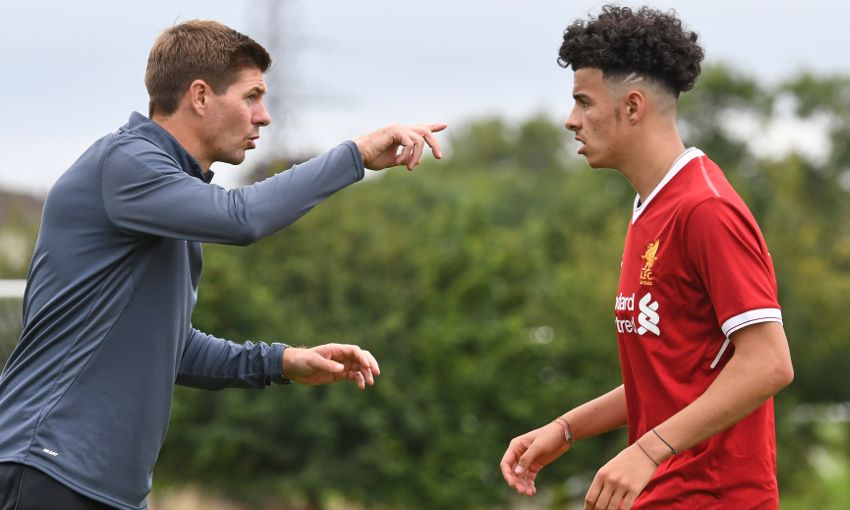 Curtis Jones and Rafael Camacho were on the mark as Liverpool U18s earned a 2-2 draw with Stoke City in an eventful encounter on Saturday morning.

Steven Gerrard’s side ended up with 10 men when goalkeeper Dan Atherton was shown a straight red card just before half-time, and Glen McAuley had to be sacrificed with Ben Williams coming on between the posts.

Jones fired the young Reds into the lead before the hosts levelled the score; Camacho then made it 2-1 on 75 minutes with an excellent finish, but the Potters again came back to earn a point.

Reflecting on the overall display, Gerrard told Liverpoolfc.com: “I’m proud of the boys and I feel for them because we deserved the three points today.

“I’m pleased with them but there are still a couple of things we need to address because we are not keeping leads for long enough.

“I was pleased to see Curtis get his goal to put us 1-0 up because he has been looking likely to score in our opening games and he was outstanding.

“We conceded a poor goal and I felt our goalkeeper could have done better with it.

“Then just before half-time on 43 minutes Dan came out of his goal and brought his man down, he was the last man, so I’ve got no complaints about the sending-off.

“We were the better team again in the second half and we pressed really well and created lots of chances.

“Liam Millar was a big threat down the left-hand side when he came on and that was probably his best performance so far.

“We then got our rewards on 75 minutes when Rafa showed great footwork, rounded the goalkeeper and slotted it into the net.

“I thought we were going to get over the line and win it 2-1 but they got a late goal and I was disappointed for the boys.”