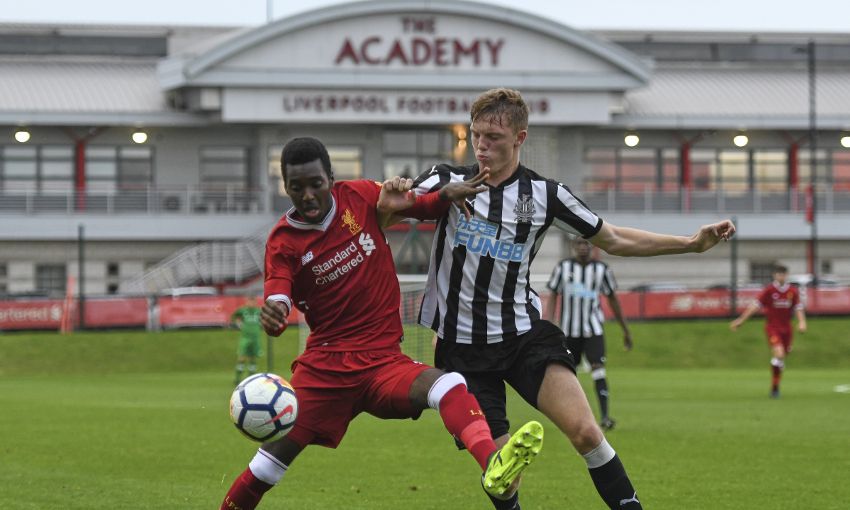 Liverpool U18s were held to a 2-2 draw in an action-packed meeting with Newcastle United at the Academy on Friday night.

Glen McAuley grabbed a pair of classic poacher finishes in the first half, only for the visitors to respond on each occasion through Lewis Cass and Thomas Allan to ensure the teams were on level terms at the interval.

Curtis Jones went closest to a decisive third in a quieter second period but the sides ultimately had to settle for a point apiece under the floodlights in Kirkby.

The home team did not have to wait long for a breakthrough.

Jordan Hunter was afforded time on the right edge of the penalty area to pick out Liam Millar at the opposite post, and his intelligent knock back across goal was ideal for McAuley to drive the ball into the roof of the net.

The satisfaction with the striker’s second of the new season was short-lived, though, as Newcastle restored parity within three minutes.

A flat set-piece sent in from the left channel found Cass in space inside the box and the centre-back took full advantage by directing a neat finish into the bottom corner.

Liverpool’s bright start to the game would have been completely undone were it not for an excellent Dan Atherton save, just past the quarter-hour mark.

Allan met an inviting cross with a firm header eight yards from goal – but Atherton’s reactions on the stretch were exactly as required and the dangerous effort was tipped over.

Steven Gerrard’s charges re-took the lead on 34 minutes and it was McAuley on the mark again.

The Republic of Ireland youth international was the grateful recipient for a straightforward header when Anthony Glennon threaded a slide-rule pass into Adam Lewis on the left to loft a perfect assist into the middle.

But Newcastle struck back once more, finding a route through to the run of Allan in behind the backline and the forward rolling the ball through the legs of the advancing Atherton.

The tempo dipped to a degree when the action resumed, though Jones went extremely close to putting Liverpool back in front as the clock reached an hour.

Another excellent Lewis delivery – this time a deep, dropping corner from the right hand side – handed Jones the chance to plant a header toward goal that was carefully pushed away by the ‘keeper.

The Reds No.10 had sparked into life and more industrious approach play by Lewis on the left preceded Jones shimmying into space inside the box and blasting too high from 10 yards.

Two reasonable penalty appeals by the hosts were rejected late on, either side of a squandered chance by Allan rushing in to connect with a cross at the far post, and it therefore ended without a winner.