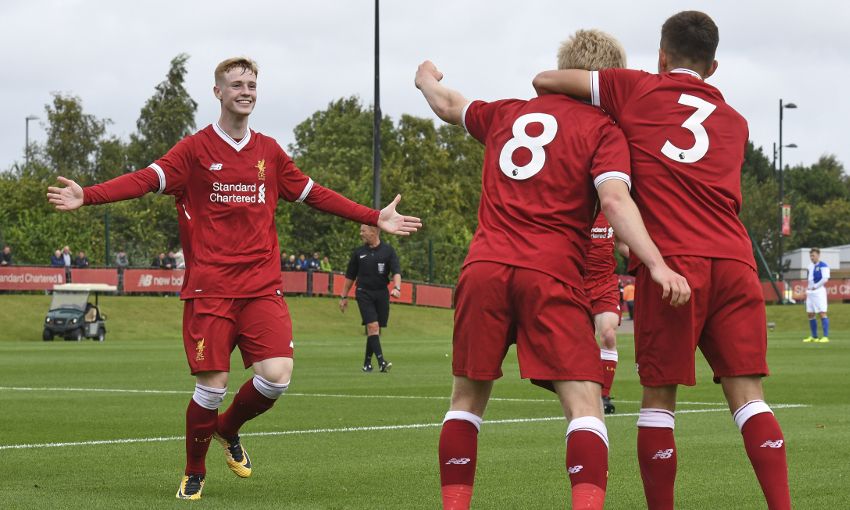 Liverpool U18s marked their opening home game of the season with a 3-2 victory over Blackburn Rovers at the Academy.

Edvard Tagseth bagged the goal the home side had threatened throughout the first half on 38 minutes with a calm follow-up finish from Glen McAuley’s deflected shot.

Liam Coyle’s second strike in as many matches doubled the advantage shortly after the break and, although Daniel Butterworth halved the deficit, a third from McAuley re-established control for Steven Gerrard’s team.

Brad Lynch set up a nervy finale for the hosts when he cracked in an excellent effort from a short corner routine, but the young Reds held out for three points.

Liverpool began the game assertively and created the first genuine chance as the clock ticked into its 10th minute.

Abdi Sharif broke into space on the right edge of the penalty area and clipped in a cross which teed up Curtis Jones for a well-executed volley that was unfortunately straight at the goalkeeper.

Gerrard’s side squandered an even better opportunity moments later.

With Blackburn’s backline caught high up the pitch, McAuley released Luis Longstaff in behind but as defenders recovered and the ‘keeper came out the No.11 dragged his low shot wide of the right post.

Jones was then disappointed to send a header too easily into the hands of Ben Winterbottom after Tagseth had played Adam Lewis through along the left and the full-back curled in an inviting cross.

Perhaps the finest opening to that point came nine minutes before the interval.

Jones led a Liverpool breakaway and had options to the left, right and through the middle as he reached the box, eventually choosing the latter.

That meant another sight of goal for Longstaff, who was thwarted by Winterbottom as he sought to dink a finish into the net.

Nevertheless, the Reds finally broke the deadlock within seconds.

A neat spin at the right corner of the area by McAuley was followed up by a shot that struck a defender and rolled into the path of Tagseth for an unerring sweep across the ‘keeper and into the bottom corner.

And four minutes into the second half, midfielder Coyle increased the lead for Liverpool with a second goal in eight days.

Longstaff won possession deep in Rovers territory, ran through to meet Jones’ pass and maintained his balance to square for his teammate to enjoy a simple tap-in.

Blackburn responded within six minutes through Butterworth, who was afforded too much time to dribble into a shooting position and smack a fine effort off the inside of the left post and in.

But Gerrard’s charges shrugged off the concession and set about restoring a cushion, which they did at the three-quarter mark of the contest.

A rapid counter-attack was prompted by the influential Tagseth and he waited patiently for the right time to set up an unmarked McAuley to his left – and the rest was never in doubt.

Back came Rovers, however, and when a short corner was recycled into the box, Lynch was clinical in controlling and lashing an angled shot into the far side of the net.

And the Reds were indebted to the woodwork in the closing moments, with first Callum Wright and then Butterworth on the rebound hitting either post, meaning an ultimately hard-fought victory for the hosts.