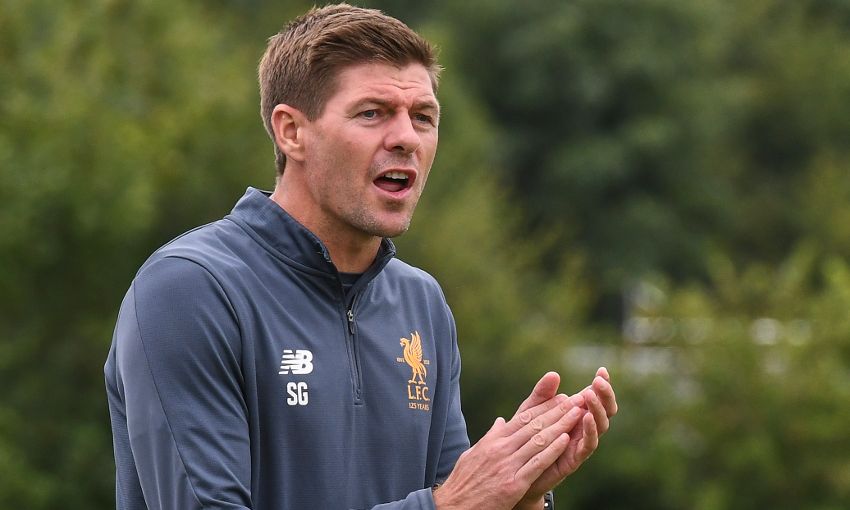 Steven Gerrard kicked every ball of his maiden league match as Liverpool U18s manager – and insists he won’t be changing his approach any time soon.

The former Reds midfielder took charge of his new team for the first time during last Friday’s opening-day 1-1 draw with Derby County.

Alongside assistant Tom Culshaw, Gerrard was a constant source of inspiration for the youngsters as they produced a promising performance against a physical Rams outfit.

Reflecting on his first league game, Gerrard told Liverpoolfc.com: “I loved it! I was shattered at the end of it because I kicked every ball and it felt like I had played in it, but that’s the way I’m going to be.

“I love the game and I love getting involved - and when you put so much time and effort in all week with your coaching staff you want those results really badly.

“Of course the important thing is to develop these players but you’ve got that winning mentality inside you and you can’t help getting involved, so I was probably slightly emotional but I was just desperate for the boys to do well and get the three points.”

Gerrard now turns his attention to the U18s’ first home game of 2017-18 against Blackburn Rovers on Saturday - a fixture that will be shown live on LFCTV from 10.30am BST.

The boss wants his charges to learn from their performance at Derby by showing they can be more clinical in the final third of the field.

"There were a lot of positives to take from our first game and also quite a few negatives as well which is always the case when you have players who are 16 and 17 and learning the game,” he added.

"We’ve watched the game back and we were disappointed with our first-half performance because it was littered with mistakes, but in the second we were very good.

"The bigger picture is it’s a point in our first game coming off the back of a bad result against Leicester City in our final pre-season game.

"In terms of our all-round effort, the work-rate and everything the players gave us, I was really pleased. We just want to try and cut out the individual errors and then we can turn those draws into wins quite easily.

"We need to show more quality in the final third, show more composure and pick the right passes. We created the better chances but we need to be more ruthless." 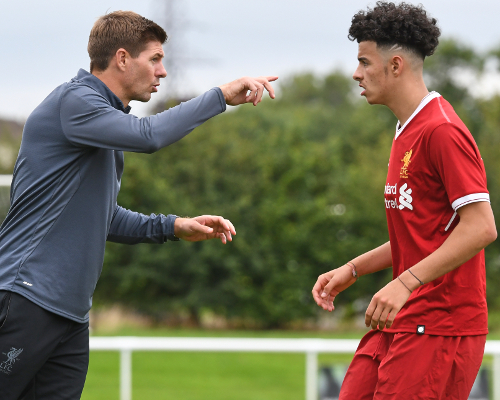 The fact that Saturday’s game will be broadcast on LFCTV has not escaped Gerrard and he is encouraging his team to take their opportunity to shine in front of the live cameras.

“You can see [the fact it’s being broadcast] two ways,” he said.

“You can see it as pressure and go into your shell, you can try too hard and not do yourself justice, or you can say, ‘This is my chance to shine as maybe Jürgen and his staff are watching or they’ve got the match on record’.

“We know Pep Lijnders always covers these games, and if [I was one] of these players then I’d be thinking, ‘Liverpool’s Academy are playing Blackburn, I know my job, I’ve worked hard on the formation all week and now the stage is set and I want to go and shine and do myself justice’.

“This is what we are trying to help the players with. This is not pressure and it should be something you are trying to grab and thrive on.”

On the game, Stevie added: “I can’t wait for it. We were satisfied with a point away at Derby but we did want more. We need to try and get maximum points on Saturday and if we can get four out of six, then that would be a decent start.

“To do that we have to do everything right, with and without the ball, but the players are ready.

“The fact they were disappointed they didn’t win at Derby is a good sign for me as a coach.

“Blackburn will be physical, powerful and direct and they will try and disrupt our rhythm, so we are aware of their strengths and we need to dominate the possession and take our chances.”