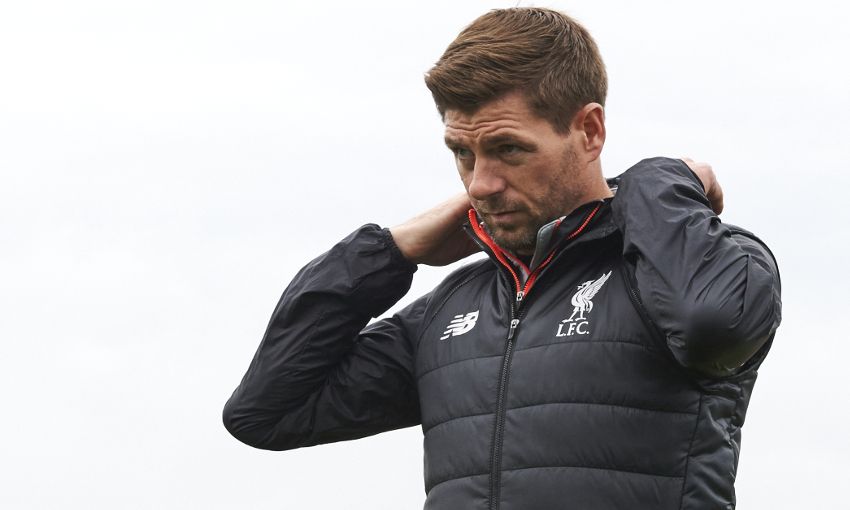 Steven Gerrard has revealed his main aim for the season ahead after taking charge of Liverpool's U18s.

As the former Reds captain begins his managerial career, he is keen to give the club's Academy hopefuls the benefit of his experience and know-how of just what it takes to graduate through the system and on to Melwood.

"The priority is to try and get as many players along the conveyor belt as possible," Gerrard told Liverpoolfc.com during the Academy's pre-season training camp in Budapest.

"I need to try and move as many players as I can into the U23s and have them stay there and then go better than that.

"We have to take each game as it comes like I did as a first-team player and try to win them all. We will always set a team up to go and win. In terms of success, I think it would be very stupid of me to put any pressure on the players - they are already under pressure.

"Because I've been a high-profile player myself there's already a lot more interest around the youth team, with all due respect, than under previous U18 managers.

"So I'm not going to set any targets in terms of the games we should win or we should compete for. I'm confident with these players that we can have an exciting season."

Gerrard also believes the willingness of Jürgen Klopp to give young players a chance to shine at senior level offers real motivation to all of the club's youth prospects.

He added: "He will only give the opportunity to people who are ready and people who he sees and watches and who he likes.

"There's been people who have been down to Melwood who don't go down very much or they haven't been seen since. Jürgen is prepared to give people chances who are ready on a football side but who he also likes and who have given him a good impression, if you like.

"I've lived a lot of my dreams at this football club and I know what it means to get into that first team and stay there, and also experience success and have that longevity.

"I would love nothing better than to see a lot more people at the Academy go on and follow suit.

"There's a lot of other footballers who have experienced that as well so they will get a chance here under this manager. It's been proven if they are good enough and if they are prepared to keep on improving and work hard, go the extra mile, then Jürgen will put them in. The evidence is there."

The former Reds skipper also insists he and the Academy staff have an important role in making sure the youngsters are in the best possible shape to make an instant and positive impression at Melwood.

"The important thing for me is Jürgen, because I'm going to be judged from the outside maybe with people looking in, at results, which is fine and I expect that and am prepared for that, but the job for me is to try and improve these players on the football pitch, individually and collectively, and also make them professionals behaviour-wise and standard-wise," Gerrard noted.

"So, for example, if one of them jumps out of my group and goes into [Neil Critchley's U23s] group I'm not going to feel like they are going to let me down or let the club down, and it's the same when Critch passes them on to Jürgen.

"We've got to prepare players for first impressions under Jürgen.

"For example, if one of our players goes to Melwood and he's sloppy, he turns up late, he hasn't got the right uniform on, his body language is wrong and then he makes a mess of it on the pitch, he's not going to stay at Melwood very long and we will feel responsible for that.

"There's a lot that goes into it that people maybe on the outside don't expect. It's not just about the football side of it, it's the whole package we need to prepare footballers to be ready for Jürgen Klopp."