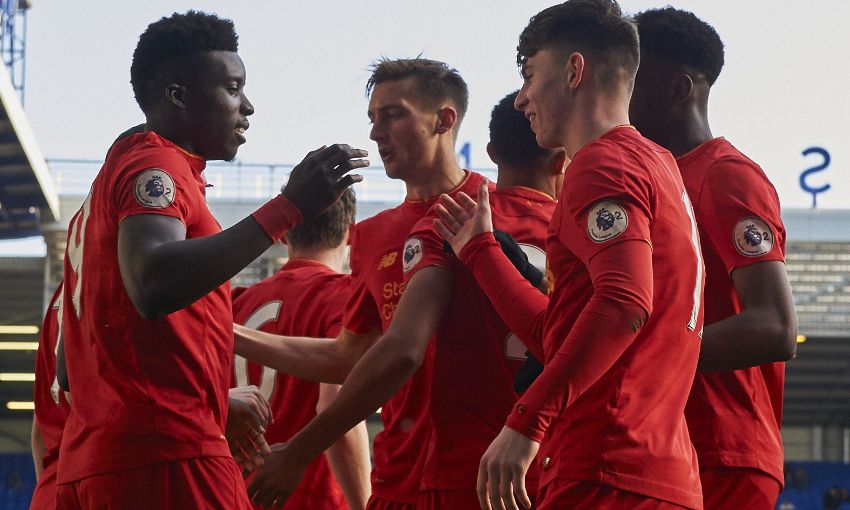 Sheyi Ojo was delighted to find the net during an impressive display for Liverpool U23s in their 2-1 win over Everton at Goodison Park on Monday night.

Assisted by a lovely pass from Harry Wilson after he pressed Matthew Pennington into a mistake on the edge of his own penalty area, the 19-year-old produced a crisp finish with his right foot to claim the opening goal.

“It was a really good way to finish the season at U23 level and I think we deserved the win, so well done to the boys,” Ojo told Liverpoolfc.com.

“I don’t usually play through the middle but it was a nice experience. I think I can play in any position [across the front line] so I tried to do my best and luckily I was able to score.

“That’s one of the things our first-team gaffer wants us to do, press from the front, and we did that. That’s what we’ve got to keep on doing because we’ll get more goals like that.”

Trent Alexander-Arnold struck the second with an unstoppable effort after excellent work from Marko Grujic, who drove forward from midfield and picked out the goalscorer’s supporting run.

“Trent is a top player and we know he is really good going forward,” said Ojo.

“He helped us and, to be fair to him, he’s been doing that all season.”

Ojo went into the mini-derby on the back of being called up to the England squad for the U20 World Cup in South Korea later this month alongside Reds teammate Ovie Ejaria.

The opening game against Argentina comes on Saturday May 20, and the young winger is hoping to impress.

“It’s always an honour to get picked for your country and I’m looking forward to it,” he added.

“Hopefully me and Ovie can do well and represent the club well in the U20 World Cup.”

After an injury-hit campaign, Ojo is ending the season in a rich vein of form for the U23s.

His dream is to become a regular in the Liverpool first-team squad. So, how can he achieve it?

He said: “I’m always improving and trying my best and I believe I have a future with this club. Hopefully, if I keep doing well and keep working hard, the rewards will pay off.”