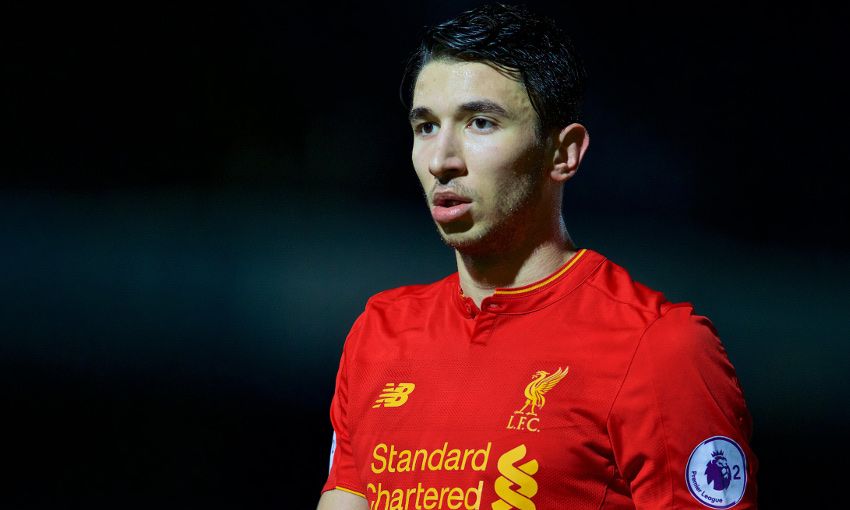 Marko Grujic made his first appearance for Liverpool since November as the U23s thrashed Reading 5-1 on Monday evening.

The Serbian midfielder enjoyed an hour-long run-out at Adams Park as he stepped up his bid for full fitness, taking his place in a starting XI featuring eight players with first-team experience.

But it was teenager Rhian Brewster who stole the show on the night, scoring twice as a sparkling first-half performance from the visitors was rewarded.

Although the Reds had attacked with verve from the moment the first whistle sounded, their first goal owed more to training-ground repetition than off-the-cuff forward play.

It came through something of a surprise scorer in Joe Gomez, the centre-back producing a centre-forward's finish as he volleyed Harry Wilson's corner home.

Liverpool twice went close in the moments that followed, with Sheyi Ojo just failing to get a touch on Trent Alexander-Arnold's low cross before clattering the post with a follow-up effort.

However, the visitors' forward-thinking approach left spaces for Reading to attack, and only a brilliant off-the-line clearance from Nathaniel Phillips prevented Yakou Meite from levelling things up with half an hour gone.

The importance of that stop was underlined four minutes later, as Brewster grabbed his first of the night with a quick shift and finish at the edge of the box to put the Reds two up.

Watch highlights of the U23s' win over Reading with LFCTV GO

That work looked to have been undone straight from the restart when Connor Randall tripped Andy Rinomhota to hand the hosts a penalty which Joseph Mendes converted convincingly.

But Brewster was on hand again to restore Liverpool's two-goal advantage just before the break, following in to volley home after Ojo had again struck the upright.

The second period started in much cagier fashion, with Reading clearly looking to deny the visitors the space they had so ruthlessly exploited in the opening 45 minutes.

That approach could not hold firm beyond the 66th minute, though, as yet another lightning counter ended in Wilson teeing up Ben Woodburn for a calm close-range finish.

There was also time for Phillips to get in on the act in injury time, the defender opening his body to curl a beauty into the far corner from 18 yards to put the seal on another big win for the U23s.