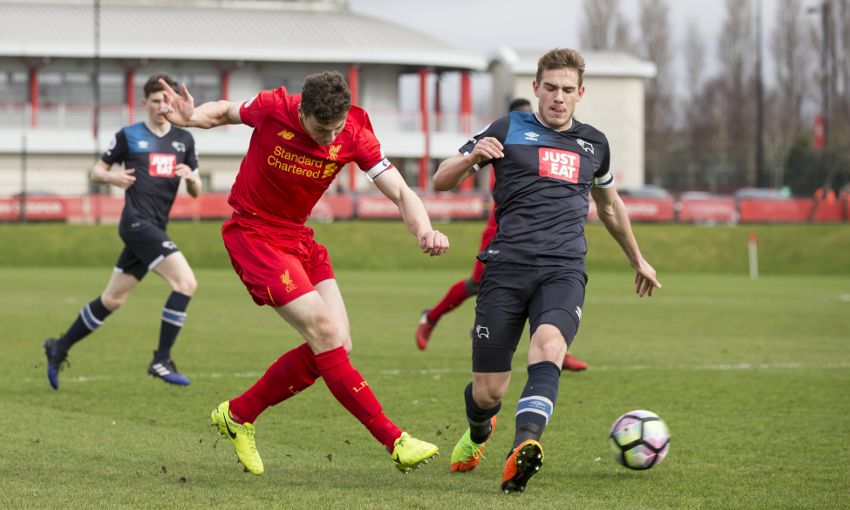 Liverpool U23s were beaten 2-1 by Derby County in their Premier League 2 encounter at the Academy on Sunday.

The visitors took the lead in an evenly-matched contest through Emil Riis Jakobsen’s header early in the second half, but an own goal by Sven Karic brought the young Reds level.

A sucker-punch was served in the final seconds of the match, though, as Mason Bennett surged into space and sent a cool finish past Kamil Grabara to win it.

Derby made the stronger start and should have taken the lead within two minutes.

Corey Whelan’s attempt to nod the ball back to goalkeeper Grabara fell short and allowed Jakobsen to sneak in for a shot that he lofted too high, much to the relief of the home side.

Liverpool soon grew into the game, with the help of several committed tackles across the pitch, and a sweeping move might have brought an opener on 11 minutes but for the visiting stopper.

Matty Virtue’s well-timed run forward was rewarded when he was found with space to square for Rhian Brewster, whose close-range effort was blocked bravely by Kelle Roos.

Similar opportunities were absent for a while thereafter, though Grabara was called upon to make an excellent save with his legs as Bennett latched onto a headed flick-on and sped into the area shortly after the half-hour mark.

Brewster spotted a chance to play Toni Gomes in behind before the interval and the Reds No.9 looked certain to score until Karic recovered to block at the final moment.

Liverpool were lively from the outset of the second half, too, and a delightful dribble in the right channel by Brewster preceded a cross which could not quite find a teammate.

Instead, it was Derby who produced the breakthrough on 55 minutes.

When the hosts squandered possession in their own half, the ball was quickly moved to Bennett on the left flank and swung into the middle for Jakobsen to send a fine header into the bottom right corner.

Mike Garrity would have been delighted by the immediate response of the Reds to the setback, although it was actually an own goal that restored parity.

A flat corner from the right hand side was not properly dealt with and Karic’s attempt to kick the ball away went completely wrong and ended up sailing into his own net.

From then on, Liverpool were in the ascendancy and only an impressive double save by Roos denied Madger Gomes – first from an accurate long-ranger and then on the follow-up from yards out.

Substitute Jake Brimmer clipped the outside of the post with a free-kick from 20 yards and Brewster was inches away from converting a low cross into the box.

And Garrity’s charges were left with no points to show for their efforts when a quick turnover in the 90th minute saw Derby release Bennett in the left channel and the wide-man unerringly fired the winner around Grabara.