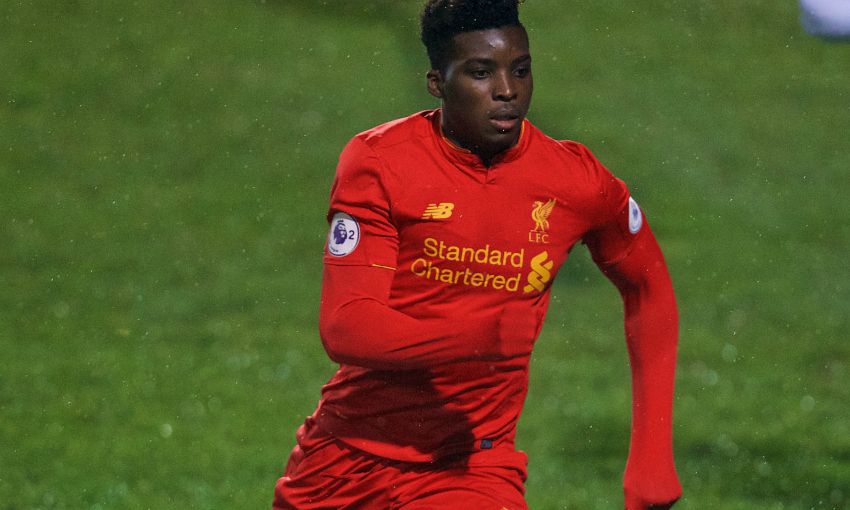 Sheyi Ojo played the full 90 minutes as Liverpool U23s were held to a goalless draw away at Sunderland in Premier League 2 on Sunday.

The 19-year-old was lively throughout the encounter and went close to scoring on several occasions.

Mike Garrity fielded a youthful team for the clash with the Black Cats, with 17-year-old Rhian Brewster and U18s captain Conor Masterson handed another opportunity at U23 level.

The young Reds made a bright start to the game with Ojo carrying a real threat down the right and the pace of Brewster causing the Sunderland defence plenty of problems.

Liverpool had an early opening from a set-piece when Paulo Alves picked out Masterson from a corner, but the Irish defender glanced his header just wide.

A lovely reverse pass from Ojo then created an opportunity for Matty Virtue but the captain was denied from close range by Max Stryjek.

LFCTV GO: The best of the Sunderland action

Sunderland also carried a threat with their No.9 Joel Asoro causing problems with his pace and direct running. Asoro carved out a chance for Lynden Gooch who was unfortunate to see his close range effort deflected past the post.

More good work from Asoro then set up Tom Beadling but the midfielder could only send his effort into the side netting from close range.

Just before half-time Garrity’s side could consider themselves unfortunate not to be awarded a penalty when Ojo was sent tumbling in the area, only for his appeals to be waved away.

Sunderland stepped up the pace in the second half and were the more dominant side after the break.

Ethan Robson was unlucky to see his free-kick come back off the bar and the hosts hit the woodwork for a second time when Luke Molyneux curled an effort against the frame of the goal.

Goalkeeper Kamil Grabara has caught the eye in his debut season with the Academy and he gave another display of his ability with a superb performance here.

The 18-year-old made a brilliant save to deny Josh Maja at close range, and then came off his line to make a crucial interception to block out Andrew Nelson.

Both sides then could have found a winner towards the end.

Ojo curled an effort inches wide of the post after cutting in from the right, and Nathan Phillips couldn’t keep his header down from close range after a terrific free-kick delivery from Sam Hart.

At the other end, deep into stoppage time, Sunderland had a glorious chance, but Robson could only fire over the bar from close range.