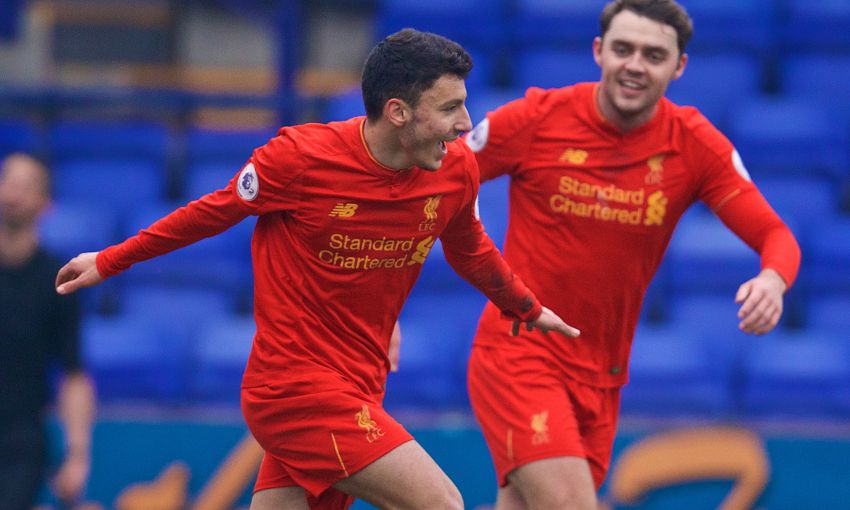 Video: Woodburn on the mark as U23s sink Ipswich Town

For Paulo Alves, the date of January 18, 2017 will be forever etched in his memory.

That was the day the 19-year-old was called into Liverpool's senior squad for the first time for the Reds' FA Cup third-round replay win away at Plymouth Argyle.

A maiden goal at U23 level followed last weekend during the 3-0 win over Ipswich Town at Prenton Park, and former Porto youngster Alves is now looking to continue his good form and keep impressing every opportunity he gets to train at Melwood.

But he admits the unexpected first-team call up for Plymouth is something that will live with him for a very long time.

“I was really proud and it was a big moment for me,” Alves told Liverpoolfc.com.

“I will always have that day in my mind and seeing my name on that shirt in the dressing room was incredible. There are no other words to describe it.

“The shirt is hanging up in my room. I look at it every day and take a lot of inspiration and confidence from it.

“I will work even harder now to try and make the first-team bench again one day and then to make my debut for this club would be a dream.”

Alves, who turned 19 on Christmas Day, is hoping for the nod to start in today’s Premier League 2 meeting with Sunderland, a game you can watch exclusively live on LFCTV and LFCTV GO with kick-off set for 12 noon GMT.

An away trip to the north east brings back happy memories for a player who made his first start at the previously-named U21 level last season at the Stadium of Light.

The Reds might have lost 1-0, but for Alves it was another step forward having previously spent seven years at Porto’s academy before making the move to Merseyside in the summer of 2015.

“That was a really good day for me, I remember that and it was nice to play at that stadium and make my debut for the U21s,” he added.

“It was a shame we lost the game but I enjoyed the experience.”

LFCTV GO: Watch the latest edition of the Academy Show

Having found the net with an expertly-executed strike during last Sunday’s win over Ipswich in the Premier League Cup, Alves revealed he has been working hard on his finishing in training.

He said: “I was very happy with my goal. The team played a brilliant game and at the end of the game I was really happy, with the performance of the team as well as my goal.

“I have scored a few goals like that in training so it was nice to get one like that where it matters. Hopefully I can get a few more goals now and help the team.”

Mike Garrity’s side are currently third in Premier League 2, nine points behind leaders Everton, but with a game in hand over their neighbours.

Alves is hoping the Reds' youngsters can give another good account of themselves in front of the live LFCTV cameras at Sunderland.

“We have some very good players, we have a good team and we are enjoying our football, so hopefully we can do well on Sunday,” he said.

“We don’t really talk about league positions but of course in our minds we want to win every game we play and then see where it takes us.”